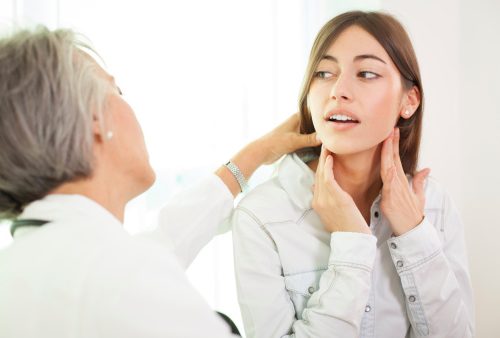 Hypothyroidism is a long-term health problem that needs to be managed throughout a person’s life. In hyperthyroidism, some cases may be temporary if they are a result of pregnancy or an autoimmune disease known as Grave’s disease, which does not have a cure.

Although both conditions affect the thyroid, they are two different diseases and so it’s important to understand their differences.

Another difference is the cause of either condition. For hypothyroidism, the most common cause is Hashimoto’s disease, and in hyperthyroidism the common cause is Grave’s disease. Both diseases are autoimmune, which means the immune system mistakenly attacks itself, leading to malfunctions of the thyroid gland.

Difference between hypothyroidism and hyperthyroidism symptoms

Other differences between hypothyroidism and hyperthyroidism are in the symptoms. Either condition can affect the body in its own unique ways, so the below chart outlines these differences within the body.

Suffering from both hypothyroidism and hyperthyroidism

There are times when both hyperthyroidism and hypothyroidism can occur together. In the first instance, treatment of one thyroid disease can contribute to the onset of another, and in the second instance an autoimmune disease can be responsible for both.

Minisha Sood, MD, an endocrinologist at Lenox Hill Hospital in New York City, explained the first instance, “Sometimes a person has hypothyroidism and is treated with too much thyroid hormone and may start to develop symptoms of hyperthyroidism, such as weight loss, rapid heart beat, sweatiness, and shakiness.” On the other hand, aggressive treatment of hyperthyroidism can lead to hypothyroidism.

Doctors suggest that when you begin to notice a switch in your symptoms either from fast to slow or slow to fast, go get yourself checked right away before complications can occur.