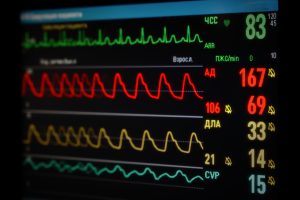 Strapping a fitness tracker around your wrist or waist may seem a little too high-tech for you. I can understand that. All these new gadgets that your kids and grandkids have such ease with can be a little overwhelming.

But just imagine one day sticking a device right to your skin – something that will give you a complete, accurate picture of your overall health. It will monitor your heart rate, blood pressure, sleep patterns and stress levels. It’s like an ongoing physical exam without a visit to the doctor.

Well, that may happen sooner than you think! Engineers at Northwestern University and the University of Illinois (UIUC) have come up with soft, stick-on patches that stretch and move with your skin. They have the look and feel of skin, and appear almost invisible.

RELATED READING: Why the next few months are critical for your heart

The research team, led by Yonggang Huang of Northwestern and John Rogers of UIUC, used traditional monitors and discovered that the wireless patch performed just as well as conventional sensors. But they were much easier to wear. This is important when it comes to long-term monitoring when the outcome depends on patients’ ability to move naturally and carry out their daily routine.

In the past, researchers developed skin electronics made of something called “ultrathin.” Although it offered high-performance health monitoring, it paled in comparison to the new and improved ones, which are cheaper, too, and could be coming to the marketplace in the next two years.

Now if these devices sound too complicated, try to think of them like Band-Aids that keep track of your daily physical activity – 24 hours a day, seven days a week.

Your skin is a window to your body

As the researchers point out, your body is a vehicle for sophisticated monitoring, and the skin is like a window to how you function internally.

Typically, with stress tests or sleep studies, bulky wires, sensors or tape on the skin can easily inhibit peoples’ natural movements and this can distort test outcomes. But a wearable patch, specifically one that sticks to the skin, better collects physiological data, and can transmit updates directly to your cell phone, computer or tablet.

This technology can revolutionize clinical monitoring, with the most significant engineering feat of the patch being the tiny wires connected to the various components without bulky wires, pads and tape. It’s convenient and portable, like your personal diagnostic laboratory on the go.

RELATED READING: A cup of this a day keeps the cardiologist away

If we keep a close eye on our health with these small devices that attach to our skin, it could one day be possible to detect most conditions before ever experiencing pain, discomfort and illness.

Perhaps most importantly, we’ll be able to detect motions associated with Parkinson’s disease at its very early stages, too, which is key to treatment.

While those wristbands and devices that count calories and your footsteps throughout the day can be a help, the future of wearable devices holds so much potential.