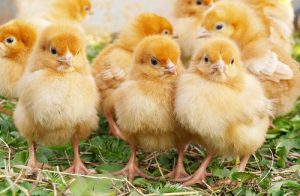 Have you ever been to a party and noticed you have to lean in a little closer to a person to be able to hear them tell a story?

Maybe you’ve noticed it’s happening more and more as you get older, sometimes even in quiet rooms?

Hearing troubles interfere with our daily lives, taking away a lot of our comfort and ease. When I learn about new science that can help battle this common problem, it’s hopeful news I like to share.

There have been many instances where the medical community has looked at animals and how they function in hopes of learning more about the inner workings of the human body. But one animal we haven’t heard too much about is the chicken.

As it turns out, they have a lot to teach us about hearing. They can regenerate their hearing themselves!

Chickens, by the way, do have ears, but they are more like ear holes. They don’t have an outer ear, or pinna, as most mammals possess, but they do have ear lobes.

You’ll never look at a chicken the same way again

As a part of the Hearing Restoration Project (HRP), researchers from the Hearing Health Foundation in New York tried to incorporate what they already know about chickens and the animal’s ability to regenerate their hearing and use it to look further into a cure for hearing loss in humans.

Like many amazing scientific discoveries, the finding that chickens can regenerate their own hearing happened by accident.

While investigating how drugs that cause hearing loss can affect the ear’s sensory cells, scientists needed to cause some damage to the cells in the ears of chickens. For 10 days, they administered a common antibiotic to chickens in the lab. Many of the ear cells disappeared.

But when scientists followed up several weeks later, the ear cells of the chickens had all regenerated.

Now HRP scientists can delve deeper into hearing cell regeneration and work toward an understanding of how it happens and how we can replicate the healing in human ear cells.

I’m wondering, too, if our overuse of antibiotics is bad for our hearing? Maybe so.


How’s your hearing? One in every five affected

According to the Mayo Clinic, some form of hearing loss affects about one out of every five people. There are several signs that your hearing is starting to slip.

If you are starting to hear sounds in your ears, like ringing, buzzing, roaring, clicking and hissing, you may want to see your doctor. These phantom noises may vary in pitch from a low roar to a high squeal, and you may hear it in one or both ears.

Sometimes, the sounds you are hearing will be so deafening, they interfere with your ability to concentrate or pick up actual sounds.

There are two kinds of tinnitus (ringing in the ears). The first one is subjective tinnitus, which is the most common. It’s caused by ear problems in your outer, middle or inner ear. Objective tinnitus, on the other hand, is rare. It’s brought on by a blood vessel problem, an inner ear bone condition or muscle contractions.

For many, tinnitus is triggered by age-related hearing loss or merely exposure to loud noises, like those from chain saws, firearms and portable music devices for long periods of time.

Earwax blockage will do it, too. So will ear bone changes, like the stiffening of the bones in your middle ear. That’s called otosclerosis, a condition that tends to be hereditary.

RELATED READING: Put down the swab if you want to protect your ears

Protect yourself from hearing loss

Making sure you stay on top of your hearing is important for your quality of life. Hearing loss can lead to stress, fatigue, sleep problems, concentration issues, memory problems, anxiety and irritability, as well as depression.

Have your ears tested regularly so you know what you’re dealing with and can take steps to prevent further loss. Wearing hearing protectors or taking breaks from loud recreational noise can help safeguard your ears. Also, turning down the volume when you’re listening to music is a good idea.

Just think, though: Nearly 50 years ago, restoring someone’s hearing seemed like science fiction. But there has been so much research and refinements of hearing aids and implants – they are becoming part of the standard treatment plan.

Along with the new research regarding chickens, it certainly appears that a cure for hearing loss and ringing in the ears is closer by the day.

After all, if chickens can regenerate the cells in their ears, perhaps humans can as well.