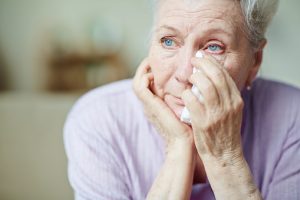 Women are at a greater risk of developing depression as they age. As the population as a whole continues to age, over the next 50 years, the number of women over the age of 65 is expected to double. Because of this, there is a large focus on age-related disorders including depression. The latest findings have uncovered an association between hot flashes and depression.

Previous studies have explored hot flashes and depressive symptoms, but a recent study specifically examined the impact of persistent hot flashes, along with other independent factors, on the risk of depression among women over the age of 65.

The results of the study were based on an analysis of 1,500 Australian women aged 65 to 79.
The study outlined the other risk factors that are independently associated with moderate to severe depressive symptoms: living in a financially insecure home, being a caregiver for another person, smoking, having a pelvic floor dysfunction, or experiencing vaginal dryness during intercourse.

Dr. JoAnn Pinkerton of the North American Menopause Society (NAMS) concluded, “Older women need to be assessed for depression, particularly if they have housing issues or caregiving responsibilities and complain of hot flashes, vaginal dryness, or pelvic floor issues.”

How to get rid of menopausal hot flashes