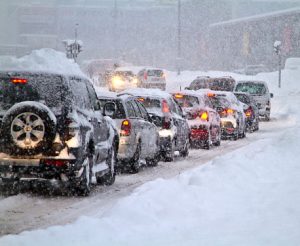 Bad weather, like snow squalls and blizzards, are common in the winter months and can be dangerous. Not only do snowstorms cause hazardous driving conditions, but they can also contribute to power outages and other events that can negatively impact your health and safety. A recent study found that, aside from the obvious dangers associated with snowstorms, they are also associated with higher hospital admission as a result of heart problems. The researchers observed a sharp spike in hospital visits two days after a snowstorm.

On the other hand, admission to the hospital for heart-related concerns actually dropped the day of the snowstorm. The researchers speculate that this is because people in need cannot leave their homes to get care, but once the storm has passed, they flood hospitals.

Lead author Jennifer Bobb explained, “We’re not talking to people and asking them, ‘Why did you go to the hospital on this day and not that day?’ Maybe people just delay going to the hospital.” On the other hand, it could be a result of people not venturing out during snowstorms. Bobb added, “You might not shovel that day, but you might shovel the next few days.”

The researchers found that hospital admission for a heart-related condition was 23 percent higher up to two days following a snowstorm.

The study looked at a situated area in Boston that was hit with severe winter storms. Information was gathered from 433,000 adults who were hospitalized during 2010 and 2015. Aside from studying cardiac events, the researchers also looked out for weather-related ailments, including frostbite, falls, and injuries up to six days after a snowstorm.

Weather-related admission increased four percent after high snowfall and injuries caused by falling increased 18 percent.
There are many factors that can contribute to cardiac events during and after snowstorms but the researchers suspect that shoveling snow is the largest risk factor.

The researchers advise that to reduce the risk of a cardiac event after a snow storm, heart patients should avoid shoveling snow, especially if they are not physically active. They also suggest to ensure you have enough prescribed medications on hand so they don’t run out, and individuals should avoid breathing in cold air if they already have a respiratory condition, as it can become worsened by doing so. Essentially, if you’re a high-risk patient do not head outdoors if you don’t have to.

Related: 5 Signs You have a Heart Problem

Heart attack and left arm pain: Is your shoulder pain due to heart problems?