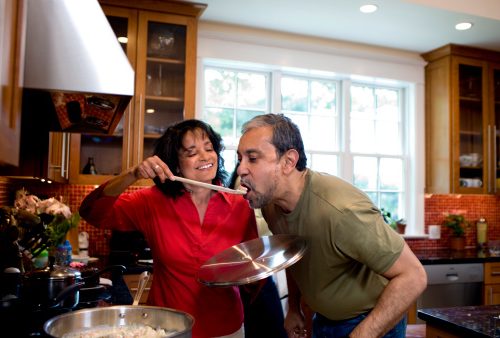 People who cook at home more often are likely to eat a healthier diet and spend less money on food, according to a study published by the University of Washington School of Public Health. Using the Healthy Eating Index, researchers were able to gauge the eating habits of 437 adults who were asked to report what they had eaten in the last week as well as whether it had been cooked at home or was take out. It was found that adults who ate more home-cooked dinners had dietary habits that better met federal guidelines for a healthy diet than their peers who ate out more often. Those who cooked at home three times a week had a score of approximately 67 on the Healthy Eating Index, while those who ate home-cooked meals six times a week had a score of roughly 74.

Only one in five Americans meet the U.S. Department of Agriculture’s dietary guidelines and an estimated 32 percent of total calories are consumed outside of the home. Also, approximately half of all money spent on food in the United States is spent on eating out. This study found that while home-cooked meals were associated with better nutrition and diets that were lower in calories, fats, and sugars, there was no increased cost to the consumer. These findings challenge the preconception that eating healthy is more expensive and more difficult for much of the population.

Drewnowski also commented on the notion that eating habits are tied to education and income, stating, “People have the preconception that a lower income leads to eating more fast foods, but that was not true in our study.”
Drewnowski and his team also found no link between education level and dietary habits, and posited that the biggest impact on whether adults cooked at home was what epidemiologists refer to as “time poverty,” essentially stating that many feel they are too busy to put the time into cooking when they can just pick up a meal instead.

This study highlights the need for better promotion of home-cooking as a healthier and cost-effective alternative to eating out. Similarly, Drewnowski and his colleagues suggest that retailers and restaurants increase the availability of healthy, less-expensive prepared meals for those who are unable to cook due to time constraints.

Related: 8 superfood swaps to eat healthy on a budget

These 7 foods can help keep you healthy

The healthiest foods in your kitchen