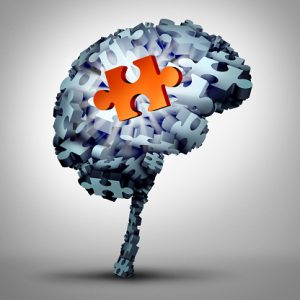 Being forgetful is something we have all experienced from time to time, and it can be frustrating when we finally remember what we forgot. Forgetting to pick something up from the store or forgetting your phone at home: these are all minor nuisances, but when we realize we forgot something, we always tell ourselves it won’t happen again.

Now imagine that you experience one of these aforementioned scenarios, but instead of trying to remedy it, you are completely oblivious to the fact that you forgot something in the first place. This is often the first sign of dementia, the most common of which is Alzheimer’s disease. Researchers used to think that a previous history of mental health issues played a role in Alzheimer’s development, but according to a new study, this may not be the case.

Alzheimer’s is a progressive disease that destroys the memory and other important mental functions. Initially, it may present as mild confusion and difficulty remembering things, but eventually, those with the disease can forget vital details they once knew, such as people in their lives, in addition to the loss of intellectual and social skills.

The debilitating disease is thought to be caused by a combination of multiple factors, including genetics, lifestyle, and environmental factors that affect the brain. However, precise reasons for its occurrence are not completely understood. Several risk factors for its development are:

Age: Perhaps the greatest risk factor for Alzheimer’s, yet Alzheimer’s is not a normal part of aging. Those who are genetically predisposed to early-onset Alzheimer’s may begin experiencing symptoms as early as their 30s.
Family history and genetics: The risk seems to be higher in those with first-degree relatives with the disease, but most genetic links are largely unexplained.

Downs syndrome: Alzheimer’s disease tends to appear 10 to 20 years earlier in these individuals when compared to the general population.

Mild cognitive impairment: Memory problems and other symptoms of cognitive decline may be an increased risk of developing dementia in the future.

A previous history of mental health disorder was often considered a risk factor. However, a study examining long-term data from nearly 60,000 people in Finland with and without Alzheimer’s disease found that those previously diagnosed with depression or other mental health disorders 10 or more years earlier didn’t show a greater risk.
However, the appearance of these mental disorders seems to be a factor. A history of mood disorders, such as depression, is associated with a higher risk of Alzheimer’s if it occurred at least five years before Alzheimer’s diagnosis. This association was not seen if the time window was extended to 10 years.

“The findings highlight the importance of proper diagnosis of Alzheimer’s disease within an appropriate time window,” according to study lead author Vesa Tapiainen from the University of Eastern Finland’s School of Pharmacy.