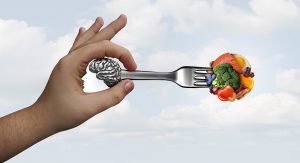 Researchers from Rush University Medical Center suggest older adults who follow the MIND diet may benefit from better cognitive performance. This specific diet may help to protect the brain from amyloid plaques and tangles.

As the body ages, the tissues on the brain can sometimes develop abnormal clumps of proteins. These proteins called amyloid plaques are a hallmark of Alzheimer’s disease and can interfere with thinking and problem-solving skills.

The MIND diet was developed by an epidemiologist and is a hybrid of the Mediterranean diet and DASH diet (Dietary Approaches to Stop Hypertension). Previous research has shown promising results that suggest the MIND diet may reduce a person’s risk of developing Alzheimer’s disease.

Klodian Dhana, MD, Ph.D., lead author of the explained, “Some have the ability to maintain cognitive function despite the accumulation of these pathologies in the brain, and our study suggests that the MIND diet is associated with better cognitive functions independently of brain pathologies related to Alzheimer’s disease.”

The Associations of Diet

For the study which began in 2004, researchers examined the associations of diet, brain pathologies, and cognitive functioning in older adults. All 569 participants were part of the Rush Alzheimer’s Disease Center’s ongoing Memory and Aging Project, which began in 1997 and includes people living in greater Chicago.

At the start of the study, participants were without any known dementia and all agreed to undergo annual clinical evaluations while alive and brain autopsy after their death.

The participants were asked to complete annual evaluations and cognitive tests to record any memory or thinking problems. They were also given an annual food frequency questionnaire about how often they ate 144 food items in the previous year.

Researchers compare the foods consumed by the participants to the guidelines of the MIND diet. To benefit from the MIND diet, it’s advised to eat at least three servings of whole grains, a green leafy vegetable and one other vegetable every day, and a glass of wine.

Most days can include nuts as a snack and beans every other day. Eat poultry and berries at least twice a week and fish at least once a week. Butter should be limited to less than 1 ½ teaspoons a day and less than one serving a week of sweets and pastries, fried and fast food.

Researchers were able to calculate the MIND diet score for each participant across the study period and found that a higher score was associated with cognitive performance including better memory and thinking skills. This was independent of Alzheimer’s disease pathology and other common age-related brain pathologies. It was concluded that the diet had a protective capacity and could help with brain health in the elderly.