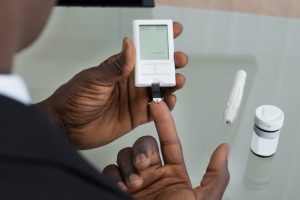 Higher dementia risk is linked to higher blood sugar levels, even among people with no diabetes. In the study, blood sugar levels averaged over a five-year period were associated with greater risks of developing dementia in over 2,000 older adults over 65.

First author of the study Paul K. Crane explained, “The most interesting finding was that every incrementally higher glucose level was associated with a higher risk of dementia in people who did not have diabetes. There was no threshold value for lower glucose values where risk leveled off.”

“One major strength of this research is that it is based on the ACT study, a longitudinal cohort study, where we follow people for many years as they lead their lives,” added senior author Eric B. Larson. “We combine information from people’s research visits every other year with data from their visits to Group Health providers whenever they receive care. And this gave us an average of 17 blood sugar measurements per person: very rich data,” Larson continued.

If you’re wondering whether you can lower your risk of dementia by consuming less sugar, here’s some insight from Dr. Crane. In his words, “Your body turns your food into glucose, so your blood sugar levels depend not only on what you eat but also on your individual metabolism: how your body handles your food.” He does suggest that regular walks can be useful in controlling glucose.

It’s also important to understand that the findings come from an observational study.

“What we found was that people with higher levels of glucose had a higher risk of dementia, on average, than did people with lower levels of glucose. While that is interesting and important, we have no data to suggest that people who make changes to lower their glucose improve their dementia risk. Those data would have to come from future studies with different study designs,” concluded Dr. Crane.

There is mounting evidence to suggest that diabetes contributes to the risk of declining brain function. On the other hand, limited studies reveal that blood sugar control may help prevent future dementia.

For the study, the researchers identified patients with type 2 diabetes and no hospitalizations registered in the Swedish National Diabetes Registry between January 2004 and December 2012. They were followed until hospital admission for dementia, death, or end of the study on December 31, 2012.

Of the study group, 11,035 patients were admitted to the hospital with primary or secondary diagnosis of dementia. Patients with poor blood sugar control were 50 percent more likely to be diagnosed with dementia. If these patients experienced a previous stroke, their risk of developing dementia was 40 percent higher.

The authors concluded, “”The positive association between HbA1c and risk of dementia in fairly young patients with type 2 diabetes indicates a potential for prevention of dementia with improved blood sugar control.”