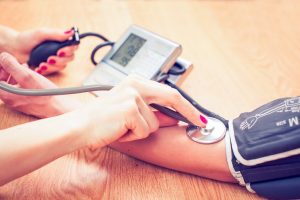 A new study, performed by at the University of Oxford, has found that adults living with high blood pressure in the long-term are at an increased risk for developing aortic valve disease (AVD). The condition occurs when the valve that controls the pumping of blood from the left ventricle in the heart into the aorta stops functioning properly.

There are two types of aortic valve disease: aortic stenosis (AS) and aortic regurgitation (AR). AS occurs when the valve between the left ventricle and the aorta becomes hardened by calcium deposits, narrowing the opening and making it more difficult for the heart to pump blood into the system of blood vessels. AR is caused by the failure of the valve to close all the way, allowing some blood to seep back into the left ventricle.

Participants in the study were 5.4 million adults from the United Kingdom, aged between 30 and 90. The data was collected from the UK Clinical Practice Research Datalink, which had gathered medical records between 1990 and 2015. The records were anonymized and none of the participants were known to have any heart or blood vessel diseases at the outset of the research. Participants provided up to seven different measurements of blood pressure, making the results that much more accurate than if they had only been measured a single time.

The study authors believe that a way to prevent AS and AR from developing later in life is to maintain blood pressure levels at a measurement lower than 140/90mmHg, which is the current threshold for a hypertension diagnosis.