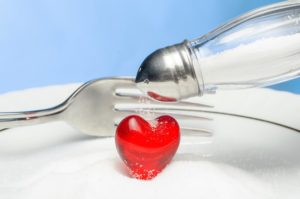 We have all heard the warnings about consuming too much salt in our regular diet and its potentially harmful effects on our heart health. When diagnosed with high blood pressure (hypertension), the first thing we are advised to do is cut salt from our diet and make healthier choices.

Salt is made up of 40 percent sodium and is the primary source of sodium consumed by humans. The consumption of salt is considered an accurate measurement of sodium intake in humans because sodium is the active metabolic substance in dietary salt.

New research is revealing that high sodium intake could have even more detrimental effects than we first understood, in the form of causing an increased risk of atrial fibrillation (AF), or abnormal heart rhythm. Since hypertension is a commonly known risk factor for atrial fibrillation, this connection makes logical sense, but is only newly being reinforced through research findings. This was the focus of a new study, which is considered the first to examine the relationship between salt intake and the incidence of newly onset atrial fibrillation.

The researchers behind the new study analyzed data gathered through the Oulu Project Elucidating Risk of Atherosclerosis (OPERA) study. The data included information on 716 participants who were followed for up to 19 years. The participants’ intake of sodium was measured through self-reported seven-day food diaries and presence of atrial fibrillation was determined through the use of the participants’ hospital records.

The researchers concluded, “Because this is an epidemiological study and has limitations, we can only suggest that a high dietary sodium intake may independently increase the risk for AF events. Subjects with short, asymptomatic AF episodes may not have come or been referred to the emergency department as outpatients or been hospitalized. Therefore, our study may underestimate the true incidence of new-onset AF [as it relates to sodium intake]. Further studies are urgently needed to verify our findings.”