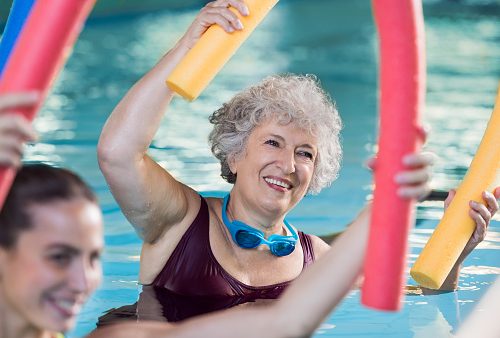 It is kind of ironic—when we were kids, we wished to be older, yet now that we’re older, we often wish to be young again. What everyone can agree on is that being a youthful adult is what most people want, as it’s a stage that allows us to live life to its fullest without being limited in any physical way. Sadly, time only moves in one direction. However, new research from Brigham Young University claims that it is possible to slow down aging, and all it requires is your willingness to sweat.

People are usually hesitant to exercise, as they think there are better things to do, but a study published in the medical journal Preventive Medicine finds that people who have consistently high levels of physical activity have significantly longer telomeres than those who have sedentary lifestyles. Telomeres are found at the end of chromosomes in our DNA and their purpose is to protect the end points of our genetic material from deteriorating or fusing with neighboring chromosomes. Telomeres act like a biological clock and are correlated with age: each time a cell replicates, a tiny bit of telomere endcap is lost. It, therefore, stands to reason that as we get older, the shorter our telomeres get.

The study in question analyzed the data from 5,823 adults who participated in the CDC’s National Health and Nutrition Examination Survey, which asked participants to provide information about 62 activities they might have engaged in over a 30-day window. This study also assessed telomere length. What the researchers found was that participants that engaged in high levels of physical activity had telomeres with a biologically aging advantage of nine years over the participants considered to have a sedentary lifestyle. Moderately active individuals did see a similar result as well, but with a seven-year advantage.

“If you want to see a real difference in slowing your biological aging, it appears that a little exercise won’t cut it. You have to work out regularly at high levels,” said Larry Tucker, an exercise science professor. According to the researchers, to be considered highly active, you would have to engage in 40 minutes of jogging as a man and 30 minutes as a woman for five days a week.
Participants of the study considered to have more sedentary lifestyles were found to exhibit the shortest telomeres, having 140 less base pairs of DNA at the end of their telomeres than highly active individuals. No difference in telomere length was observed between low or moderate physical activity and the sedentary participants.

The researchers hypothesize that this observance may be tied to inflammation and oxidative stress, as previous studies have linked these factors to telomere length. It is known that regular exercise can help suppress inflammation and oxidative stress, leading to the observed correlation. However, the researchers do admit that the exact mechanism behind this process is unknown.

“We know that regular physical activity helps to reduce mortality and prolong life, and now we know part of that advantage may be due to the preservation of telomeres,” said Tucker.

Related: Aging process may be reversed by high-intensity aerobic exercise

Defeat aging with this simple trick