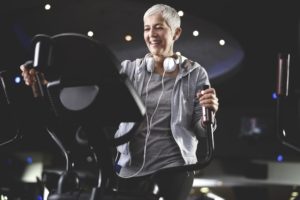 Many people know high intensity interval training (HIIT) is a great way to stay fit and strong, but new research suggests that it may also help prevent cognitive decline such as dementia. The study out of the University of Queensland found that high intensity interval exercise may be more effective than continuous exercise for increasing brain blood flow in older adults.

Researcher Dr. Tom Bailey from the Centre for Research on Exercise, Physical Activity, and Health at UQ’s School of Human Movement and Nutrition Sciences explained that while many adults use HIIT for improving cardiovascular health, it’s effect on brain health hasn’t been studied enough to find any known associations.

He said, “As we age, the flow of blood to the brain and arterial function decreases. These factors have been linked to a risk of cognitive decline and cardiovascular events, such as stroke. Finding ways to increase brain blood flow and function in older adults is vital.”

The study that found the connection between HIIT and age-related cognitive illnesses was conducted in collaboration with Associate Professor Christopher Askew at the University of the Sunshine Coast and neuroscientists at the German Sport University Cologne. It has been the first of its kind to compare the brain blood flow in men during both continuous and intensity interval exercise.

Exercise and Rest Period Are Important

Dr. Baily explained the findings, saying, “One of the key takeaways from the study was that both the exercise and the rest period were important for increasing brain blood flow in older adults.”

“The benefits of exercise on brain function are thought to be caused by the increase in blood flow and shear stress, the frictional force of blood along the lining of the arteries, which occurs during exercise.

“This study aimed to identify the type or format of exercise that causes the greatest increases in brain blood flow, so we could help to optimize exercise programs to enhance brain function.”

While this study was an essential step in finding a connection between cognitive decline and exercise, it only focused on short-term increases in brain blood flow. Dr. Bailey said the next step would be to investigate the benefits of HIIT on brain health in the long term.

HIIT involves short bursts of intense exercise alternated with low-intensity recovery periods. Although there are no universal HIIT session duration guidelines, these intense workouts typically last under 30 minutes, with times based on a participant’s current fitness level. Be sure to check with a doctor before starting any new exercise routine.