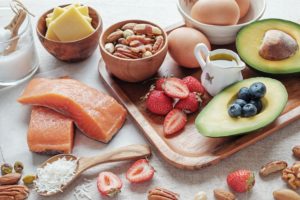 John Hopkins Medicine researchers have recently reported that a high-fat, low-carbohydrate diet could improve cognition in older adults. It was found that eating a diet similar to Atkins may improve brain function and memory.

The study looked at 14 older adults with mild cognitive problems suggestive of early Alzheimer’s disease with an average age of 71 years. Researchers had a difficult time finding participants willing to stick to the restrictive diets for the three-month study, but these participants did manage to adhere to a modified Atkins diet. They showed a small but measurable improvement on standardized tests of memory compared to those on a low-fat diet.

Jason Brandt, Ph.D. professor of psychiatry and behavioral sciences and neurology at the Johns Hopkins University School of Medicine spoke about the study: “Many people would rather take a pill that causes them all kinds of nasty side effects than change their diet. Older people often say that eating the foods they love is one of the few pleasures they still enjoy in life, and they aren’t willing to give that up.”

The results published in the April issue of the Journal of Alzheimer’s Disease are early findings of proof that the modified Atkins diet has the potential to cut the risk and progression of cognitive impairment including Alzheimer’s and other dementias. They are promising enough to warrant larger, longer studies on the link between the dietary impact on the brain.

Brandt said, “Our early findings suggest that perhaps we don’t need to cut carbs as strictly as we initially tried. We may eventually see the same beneficial effects by adding a ketone supplement that would make the diet easier to follow. Most of all, if we can confirm these preliminary findings, using dietary changes to mitigate cognitive loss in early-stage dementia would be a real game-changer. It’s something that 400-plus experimental drugs haven’t been able to do in clinical trials.”

Brandt explained, “Typically, the brain uses the sugar glucose — a product of carbohydrate breakdown — as a primary fuel. However, research has shown that in the early stage of Alzheimer’s disease, the brain isn’t able to efficiently use glucose as an energy source.”

For the study, researchers tested to see if people with mild cognitive impairment would benefit from a diet that forced the brain to use ketones instead of carbohydrates for fuel.

When comparing results, the tests of delayed recall were shown a few minutes earlier in those following the Atkins diet compared to those who didn’t follow the diet. This showed that there might be more to test in the connection between dietary intake and cognitive decline.

Researchers say the hardest part is for people to stick to an enforced diet. But Brandt’s team did observe some promising results even in those lax with the diet. This could mean that a milder version of the high-fat/low-carb diet, perhaps in conjunction with ketone supplement drinks, is worth further study.