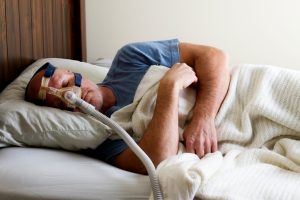 A study recently published in the Journal of Clinical Sleep Medicine indicates that positive airway pressure (PAP) therapy for sleep apnea could potentially have a positive impact on sleep among patients who suffer from hypertension. These findings just might explain why sleep apnea, which causes a person to have one or more pauses in breathing or shallow breaths while sleeping, impairs the quality of life of many who have high blood pressure.

During the study, researchers discovered improvement in daytime sleepiness, depressive symptoms, and fatigue within a year of initiating treatment. They reported that results were significant even in those patients who suffered from resistant hypertension. A person is classified as having resistant hypertension if they are taking a diuretic and at least two other blood pressure medications, but their blood pressure still isn’t improving.

About 900 patients with sleep apnea and hypertension were involved in the study. Fifteen percent were confirmed to have resistant hypertension. They were all treated through the Cleveland Clinic Sleep Disorders Center. Patient questionnaires were evaluated using the Epworth Sleepiness Scale. A separate questionnaire was used to look at depression, and a fatigue severity scale was also used.
Although the authors of the study have indicated that they don’t know of any other previous studies examining changes in sleep function outcomes with PAP therapy in patients with hypertension, there have been researches suggesting that obstructive sleep apnea and high blood pressure have an association.

Dr. Harneet Walia who practices sleep medicine in Cleveland was involved in a study that showed untreated sleep apnea can raise the risk of high blood pressure in some people who are resistant to medication. Her research included people with cardiovascular risk factors, as well as those currently suffering from heart disease and moderate to severe obstructive sleep apnea.

Experts at the American Academy of Sleep Medicine have suggested that high blood pressure that is resistant to treatment with standard medications is a strong warning sign that sleep apnea could be present and could increase an individual’s risk for heart disease and stroke. They encourage anyone with high blood pressure to discuss their risk for sleep apnea with their doctor.

Dr. Harneet Walia in Cleveland agrees that if a person is taking multiple medications in a desperate effort to get high blood pressure down, they could be putting themselves at a higher risk for a cardiovascular event.

It is believed that one in three Americans have high blood pressure. Sleep apnea impacts about 18 million Americans. Although there are different types of positive airway pressure (PAP) devices, the treatment essentially involves placing a mask or nose tubes over the nose or the nose and the mouth, and allowing a machine to blow compressed air into the lungs. People normally go through a sleep test before they are prescribed PAP. It is the most common treatment for obstructive sleep apnea.