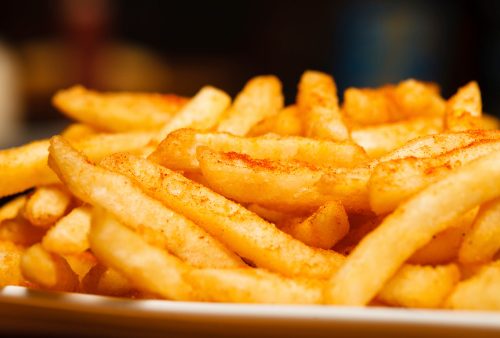 A chemical commonly found in heavy industry has now also been found in french fries. The chemical is known as acrylamide, and researchers are uncovering ways to reduce exposure to it from french fries.

In studies, the chemical was found to increase cancer risk in rats, and although research on the chemical is incomplete in humans, the Agency for Research on Cancer considers it “a probable human carcinogen.”

Acrylamide can be found in many foods that are cooked at temperatures higher than 248 °F. Researchers first uncovered the chemical’s presence in food over a decade ago. High levels of the chemical can be found in fried potato products, such as potato chips and french fries.

The research team, led by Yi Wang, Ph.D., examined 140 different types of potatoes to determine which has the lowest levels of acrylamide. The acrylamide in potatoes is believed to stem from the genetics of the potato.

Researchers planted potato varieties across the U.S. and studied them in labs after harvest. From there the researchers fried up the potatoes to measure the level of acrylamide produced.

The researchers determined it is possible to find potato varieties that produce less acrylamide, which are similar to the common potatoes used for consumer goods. Dr. Wang said, “The real challenge is to find the varieties that not only have those characteristics, but also yield finished products with desirable processing quality that meet the stringent standards of the food industry.”

Two promising potato types are Payette Russet and Easton, and they have been released for consumer use.

If the researchers are able to identify the specific genes that lead to acrylamide production, they will be able to eliminate it in the future.

The findings are published in Crop Science.