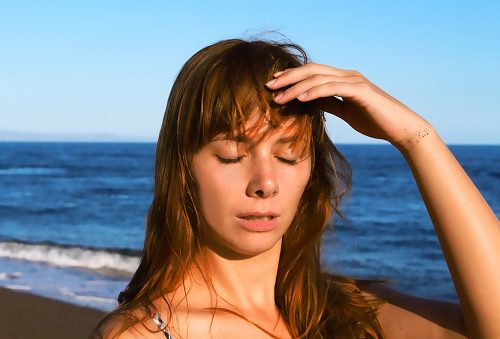 Heat rash should not be confused with a sunburn, as the two are very different. Heat rash, also known as prickly heat and miliaria, can take place during hot, humid weather. A heat rash occurs when sweat ducts become blocked, thus trapping perspiration beneath the skin, causing red bumps, itchy or prickly skin, or blisters. Sunburn is the skin’s response to UV exposure, causing the skin to become red, sore, and even peel. Unlike a sunburn, a heat rash won’t increase your risk of skin cancer.

Although heat rash can clear up on its own, in severe cases it requires medical treatment. The quickest way to relieve heat rash is to cool down the skin.

Here we will further explore the causes, symptoms, and home remedies for heat rash.

Sweating is the body’s way of keeping us cool. When sweat is released it is normally evaporated. In the case of a heat rash, sweat is trapped beneath the skin, leading to inflammation and a rash.

Although the reason why sweat may become trapped is not fully understood, there are some factors that may play a role, including immature sweat ducts, tropical climates, physical activity, overheating, and prolonged bed rest.

Heat rash risk factors include being an infant (although adults can develop heat rash as well), living in tropical climates, and performing physical activity that promotes excessive sweating.

Heat rash is most commonly found in adult’s skin folds – areas like the armpit, back of the knee, inner elbow, etc. There are different types of heat rash depending on how deep the sweat ducts are blocked. Each type of heat rash presents its own set of signs and symptoms.

Normally, a heat rash will clear up on its own, and the quickest way to resolve the rash is by cooling the skin. In severe cases of heat rash, your doctor may prescribe ointments to relieve discomfort and prevent complications. Some topical treatments include calamine lotion, anhydrous lanolin, and topical steroids.

Here are also some home remedies to try when dealing with a heat rash:

When to see a doctor for heat rash

If symptoms of heat rash last for several days, this is an indicator that you should see a doctor. Additional symptoms calling for medical attention include increase in pain, swelling, redness, or warmth or the area, pus draining from lesions, swollen lymph nodes, or fever and chills.