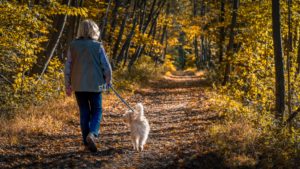 According to new research, men who participate in at least 30 minutes of walking a day after a heart attack live longer than those who are less physically active. This new study presented at the American Heart Association’s Scientific Sessions also found that an even more significant survival advantage is found in men who had a high level of physical activity prior to a heart attack and who continued the same level after the event.

Those who are physically active after a heart attack also live longer, if they stick with it throughout their older years. This information was found by Laila Al-Shaar, lead author of the study and a postdoctoral research fellow in the program in cardiovascular epidemiology at the T.H. Chan School of Public Health at Harvard University in Boston. Dr. Al-Shaar is also a member of the American Heart Association’s Epidemiology Early Career Committee.

Speaking about the research Al-Shaar said, “Maintaining regular physical activity throughout adult life is important because it is associated with better survival, even after a heart attack. But it is never too late to pick up on physical activity.”

The study looked at self-reported physical activity information of more than 1,500 men both before and after they experienced a heart attack. This was, on average, at the age of 65. The men were all participants in the long-term Harvard Health Professionals Follow-up Study.

It was also found that men who had low levels of physical activity prior to their heart attacks, but high levels after the event, were about one-third less likely to die than those who stayed at low levels. To achieve the survival benefit, men who started with high-level activity had to stick with it over the long term. More significant activity that wasn’t maintained more than a few years didn’t increase survival.

Researchers also noted that men who walked at least 30 minutes per day after their heart attack were almost a third less likely to die, no matter what other physical activities they engaged in. Those who walked the quickest showed a lower risk of death.

Although the study was conducted exclusively on men, the results in physical activity are similar to a previous study conducted in postmenopausal women with cardiovascular disease. Guidelines set by the U.S. Department of Health and Human Services and the American College of Cardiology/American Heart Association both support the suggested exercise after hospitalization. They advise heart patients to consult with their health care providers about the type and amount of physical activity that is most appropriate for their condition.