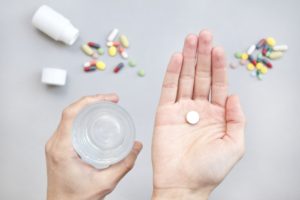 For the first time, researchers may have found the reason why heart medication causes muscle pain. This study from McMaster University in Canada believes they have found a mechanism explaining why some people who take drugs to lower their cholesterol develop sore, aching muscles.

Joint pain, backaches, and other musculoskeletal complaints are some of the most prevalent health issues recorded. And when it comes to joint pain specifically, arthritis is the most common cause. Many people often blame their achy joints on arthritis, but what many people don’t know is that everyday medications such as statins can cause joint pain too.

It is estimated that nearly half of Americans and a quarter of Canadians are receiving or are eligible for statin treatment. Statin drugs are used to significantly lower cholesterol and ultimately reduce the risk of cardiovascular disease.

While there are many people taking heart drugs, there is unfortunately a very common side effect of using these medications. Muscle pain is actually so common and painful that it is the primary reason for why people stop taking their medication without their physician’s permission. This why it is so important for health care providers to understand what can cause the muscle pain associated with the drugs.

The research team at McMaster found that muscle cells treated with statins released the amino acid called glutamate at much higher levels than muscle cells that were untreated. Glutamate is a potent activator of muscle pain receptors, so the release of this amino acid is thought to trigger the sensation of muscle pain.

Thomas Hawke, senior author of the study and a professor of pathology and molecular medicine at McMaster University spoke about the study saying, “We found that statins were able to enter the muscle cells and cause oxidative stress. This resulted in the muscle trying to increase its production of antioxidants to combat this stress. The side-effect of this antioxidant production was the release of glutamate out of the muscle cells.”

Irena Rebalka, first author of the study and a research associate in the Hawke Lab added, “We found that administering some well-known antioxidants, such as Vitamin E, were successful in helping reduce glutamate release. We are now expanding our studies to determine further compounds which could be used in conjunction with a person’s statin prescription to reduce the burden of muscle pain resulting from this drug.”

Understanding the reason why statins cause muscle pain and learning how this could be treated would be very helpful for healthcare professionals to effectively manage their patient’s cholesterol. This is ultimately to help to lower their cardiovascular risk. Without this knowledge, there is the worry that they may stop taking medications without their doctor’s knowledge, putting their health at risk.