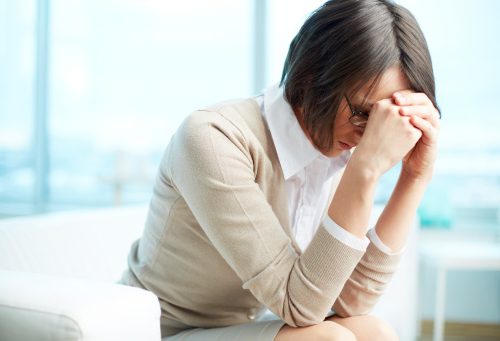 Heart attack recovery is slower with mental stress in women. Women experience higher stress levels than men, which can contribute to worsened recovery outcomes when it comes to heart attack, according to researchers at Yale University.

First author Xiao Xu said, “Women tend to report greater stress and more stressful life events than men, potentially because of their different roles in family life and work, as compared to men. This difference in the level of stress may be an important reason for sex-based differences in recovery after acute myocardial infarction.”

The researchers analyzed data from the Variation of Recovery: Role of Gender Outcomes on Young AMI Patients (VIRGO) study. They studied acute myocardial infarction (AMI) patients and measured each patient’s perceived psychological stress during the initial hospital visit. An example of a question the patients answered is, “In the last month, how often have you been upset because of something that happened unexpectedly?” and the patients gave a score between zero and four.

Senior author Dr. Harlan M. Krumholz said, “This study is distinctive in focusing particularly on young women and going beyond traditional predictors of risk to reveal how the context of these people’s lives influences their prognosis.”

Xu added, “Helping patients develop positive attitudes and coping skills for stressful situations may not only improve their psychological wellbeing, but also help recovery after AMI. Stress management interventions that recognize and address different sources of stress for men and women would be beneficial.”

Researchers have found that women under the age of 50 who experienced a recent heart attack were at a higher risk of restricted blood flow caused by high psychological stress. The findings give some explanation as to why younger women who experience a heart attack have greater complications and higher mortality rates, compared to men. The findings come from Emory University where researchers studied patients’ response to stress in the form of public speaking on an emotional topic. The researchers found that women under the age of 50 were more likely to experience stress-induced ischemia, compared to men of the same age.

Lead researcher Dr. Viola Vaccarino said, “This is the first study to examine the cardiovascular effects of psychological stress as a possible mechanism for the greater mortality after myocardial infarction among younger women. We saw a dramatic difference in mental stress-induced ischemia specifically in younger women. In addition, when ischemia was graded in a continuous way, we saw that it was twice as severe among the younger women.”

It is quite rare that women prior to the age of 50 will experience a heart attack – which reveals that women who do may have severe forms of heart disease. An explanation for this, according to the researchers, has to do with women experiencing higher levels of psychological stress. Dr. Vaccarino added, “Yet if we look at the statistics, factors such as poverty, race, and depression do not explain the difference. Yes, women have more stressors. But our data show that women also may be more vulnerable to the effects of mental stress on the heart. This could be an added stimulus to the medical community to pay more attention to the emotional factors in cardiac patients. We are now taking a closer look at potential physiological factors that account for the additional susceptibility in younger women.”

The researchers have distinguished inflammation and heart rate variability as contributing factors to women’s risk of a heart attack. One inflammation marker in particular is a direct result of environmental exposures to mental stress and it’s seen in healthy and unhealthy individuals. Researchers found that highly stressed women under the age of 50 also had high levels of the inflammation marker Interleukin-6.

The research team will continue their work to better understand the role of stress in ischemia.

The heart attack symptom you might not know about
Migraine with aura increases risk of heart attack, blood clots in women