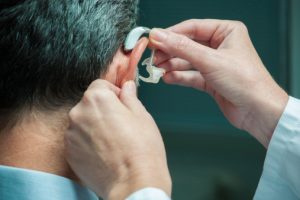 New research suggests hearing loss in seniors is linked with earlier death. The study included 1,700 participants over the age of 70, and the research team found those with hearing loss increased their risk of death by 21 to 39 percent. Experts do caution that the study does not suggest hearing loss shortens a person’s life.

Dr. Ana Kim, from the New York Eye and Ear Infirmary of Mount Sinai, said, “This is an interesting observation, but it also needs to be taken with a grain of salt. There are so many variables that go into mortality; it would be too simplistic to say this is because of hearing impairment.”

Lead researcher, Kevin Contrera, agreed the findings do not prove that hearing loss will lead to death, but he did mention, “People tend to think, ‘Oh, everybody loses their hearing as they get older.’ But hearing loss has important effects on your life.”

Roughly one-third of U.S. seniors aged 65 to 75 and half of those 75 and up suffer from some level of hearing impairment.

The latest findings combined data from government surveys. The focus was on nearly 1,700 seniors over the age of 70. From the total, 589 participants had mild hearing loss, and 550 had moderate to severe hearing impairment. The remaining 527 had normal hearing.

Seniors with hearing loss also experienced other health complications, like smoking and heart disease, but when such factors were taken into account, the fact still remained that those with hearing loss had a higher risk of death.

Previous research on hearing loss revealed that it can affect memory and physical activity, so Contrera does suggest the study could reveal that hearing loss can increase the risk of death.

Kim suggests additional research needs to be conducted to find out if improved hearing – with the use of hearing aids, etc. – could potentially extend a person’s life.

Both researchers do agree that even if hearing loss isn’t directly linked with death, it does have a huge impact on quality of life.

Contrera commented that only about one-fifth of those with hearing loss use a hearing aid. Lack of awareness of the impact hearing loss can have on a person’s life, along with the cost, are two factors which could prevent people from using hearing aids. As Contrera pointed out, purchasing a hearing aid could be the third largest purchase in your life – after a house and a car.

The findings were published in JAMA Otolaryngology – Head and Neck Surgery.