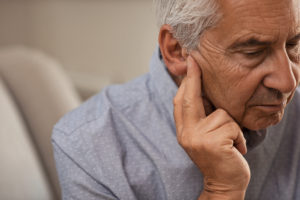 A new study published in the medical journal JAMA Otolaryngology-Head & Neck Surgery has shown a connection between slight hearing loss and mental health in seniors. It was shown that hearing loss that is less severe than the usual cut-off for diagnosing hearing loss has measurable mental effects.

Researchers found that when they used a stricter threshold to include mild hearing loss, they found that patients may be experiencing cognitive decline earlier than previously thought. There has been a well-established link between age-related hearing loss and mental health, but this new study sheds light on patients who may have been overlooked.

The established hearing loss threshold is currently set at 25 decibels, but it was in patients that experienced a hearing loss of just 15 decibels that cognitive decline was first noted. These seniors may have problems hearing the volume of a whisper or rustling leaves, and until now, it wasn’t thought to have had any “clinically meaningful” connection to mental health.

Some scientists have commented on the findings with their suspicion that hearing issues may lead to thinking issues because the brain needs to redirect so much attention to hearing that it doesn’t exercise other mental functions as much as it should.

“People with worse hearing use so much more brainpower to decode the words that are said, they don’t get to process the meaning of what was said, which is the intellectually stimulating part,” said the study’s lead author, Dr. Justin Golub, an assistant professor in the department of otolaryngology-head and neck surgery at New York-Presbyterian/Columbia University Irving Medical Center in New York City.

For the study, researchers analyzed information from the Hispanic Community Health (HCHS) and the National Health and Nutrition Study (NHANES), both of which contained data on participants who were given both hearing and cognitive testing. Participants with an average age of 59 years who had not developed early-onset hearing loss were focused on for the purpose of the study, which included 6,451 people. Accounts of cardiovascular health problems and demographics were also noted as these may impact the likelihood of developing cognitive problems.

The research showed that participants who developed slight hearing loss also performed worse on cognitive tests. Golub said, “People who had difficultly hearing a whisper (but technically still had normal hearing), scored 6 points worse on a test of speed and attention than people who had absolutely perfect hearing. This took into account other factors, such as age. Scientists say that the 6-point change could make a meaningful difference in day to day function.”

Golub and his team suspect that if those with mild hearing issues started wearing hearing aids sooner, they may be able to stay more mentally sharp.

He concluded by saying, “We’re running a randomized controlled trial right now treating one group of people with hearing loss and comparing them to a group with no treatment. We’ll see if in a couple of years, the people with hearing aids are cognitively sharper.”