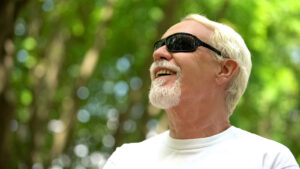 Oftentimes, seniors are unaware of their own health risks. This can lead to serious health complications down the road in some cases. This new study aims to change that by using hearing and vision impairment to identify those at risk for cognition issues.

For the study, researchers analyzed ten consecutive waves of the American Community Survey (2008-2017). A total of 5.4 million older Americans were included in the study, including institutionalized and community-dwelling older adults.

Cognitive impairment is a growing concern among seniors. It can affect memory and thinking skills and make it difficult to perform everyday tasks. This study helps to confirm that cognitive impairment is often associated with age-related factors such as vision loss and hearing impairment and may help doctors identify those more at risk.

This new study could be a game-changer for seniors and their families, as it will allow for preventative measures to be taken sooner rather than later.

As this research proves, it is vital to take steps to ensure hearing and vision are kept as healthy as possible as you age. One of the primary causes of age-related vision loss is low levels of lutein and zeaxanthin. These natural pigments have been shown to protect the eye from oxidative damage caused by ultraviolet light and environmental factors.

It is difficult to get enough of these pigments from diet alone. 20/20 Vision contains 20 mg of lutein and 2 mg of zeaxanthin to help give your eyes the nutritional support they require. In addition to those two ingredients, this unique formula also contains various vitamins, minerals, and herbal ingredients to help support and maximize vision and eye health.

Many people tend to overlook hearing problems until it is too late. But Hearing Rescue may be able to help thanks to its unique formula of vitamins, minerals, and herbal extracts. This includes ingredients that possess antioxidant properties which combat free radicals. One of its main ingredients is folate which has been found to help support people with low levels of folic acid suffering from age-related hearing loss.

While some degree of cognitive decline is nearly inevitable as you age, other numerous factors can take a toll on the ability of the brain to function at peak potential. This can affect memory, concentration, and overall brain function.

The Smart Pill can help enhance cognitive function and memory through 9 ingredients that help support, nourish, and maximize brain health. These include ginkgo biloba, huperzine A, bacopa extract, rosemary extract, and a B vitamin complex. This unique formula helps boost circulation, fight free radicals, and provide nutritional support to assist with cognitive function.