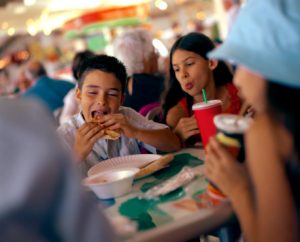 Raising young children can be difficult especially when they constantly bounce off the walls and make a ruckus. Feeding them can be especially problematic as their favorite foods may not line up with a nutritional diet, especially for developing minds and bodies. But giving in to our children’s demands for that bowl of fries instead of a balanced meal could be doing more harm than good in regard to their future happiness.

According to a new study conducted by researchers from The Sahlgrenska Academy, University of Gothenburg, Sweden, better adherence to healthy eating guidelines in children is associated with better self-esteem and fewer emotions and peer problems.

These problems include having fewer friends or being picked on or bullied, regardless of body weight.

“We found that in young children aged two to nine years, there is an association between adherence to healthy dietary guidelines and better psychological well-being, which includes fewer emotional problems, better relationships with other children, and higher self-esteem, two years later. Our findings suggest that a healthy diet can improve well-being in children,” said the corresponding author of the study, Dr. Louise Arvidsson.

Looking at thousands of children across Europe

The study in question looked at over 7,000 children between the ages of two and nine years of age from a total of eight European countries, which included Belgium, Cyprus, Estonia, Germany, Hungary, Italy, Spain, and Sweden. These children were graded with respect to their healthy eating habits and given a score reflecting their adherence to it. Higher scores indicate better adherence to a healthy diet.

Healthy dietary guidelines include limiting intake of refined sugars, reducing fat intake, and eating fruits and vegetables. At the beginning of the study, parents were asked to report how often per week their child consumed food from a list of 43 items and depending on their child’s consumption of these foods, a score was given.

Additionally, parent relations as well as emotional and peer problems were reported by parents through questionnaires. Height and weight were also measured at the beginning and end of the study.

It was found that children with higher scores at the beginning of the study were associated with better self-esteem, which continued even two years later into the study. This association between healthy eating habits and well-being was found to be similar regardless of whether children were normal weight or overweight.

“It was somewhat surprising to find that the association between baseline diet and better well-being two years later was independent of children’s socioeconomic position and their body weight,” commented Dr. Arvidsson.

All in all, the study found positive psychological associations in children who ate balanced healthy diets. However, the children who adhered to a poor diet were more likely to drop out of the study during the two-year period which may, therefore, cause this aspect of the study to be underrepresented.

Related: Unique traits in children should be used to their advantage