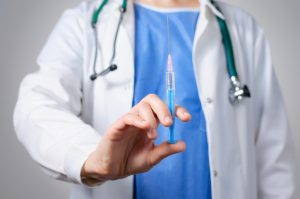 Although last year’s flu vaccine was the most successful yet, low vaccination rates last season have health officials worried for another low turnout this year, especially among the elderly.

Dr. Tom Frieden, the CDC director, warned, “Flu is serious. Flu is unpredictable. Flu often gets not enough respect. If we could increase vaccination coverage in this country by just five percent, that would prevent about 800,000 illnesses and nearly 10,000 hospitalizations.”

This year’s flu shot has been updated to protect against three or four flu strains which are predicted to be common during the 2016/2017 season.

Dr. Frieden added, “We also say, get it by the end of October and don’t delay. A vaccination deferred is often a vaccination forgotten. And we want to ensure as many people as possible get the flu vaccine.” Dr. Frieden received the flu shot during the announcement.

The largest decreases in the flu shot rates were seen among adults between the ages 50 and 64, with less than 44 percent getting vaccinated.

Seniors are at the highest risk for complications associated with the flu, so if numbers continue to drop, the risk of flu-related complications rises.
During the 2014/2015 season, over three-quarters of the nearly one million people who were hospitalized as a result of the flu were over the age of 65.

On the other hand, toddlers were seen to be the most protected, but there is a concern that these numbers will drop this year as well because the nasal spray vaccination has been pulled off the market due to its ineffectiveness. Experts urge parents who were giving their children the nasal spray to switch to the flu shot to ensure they are protected.

There’s plenty of vaccine available, so there no shortage is foreseen for this upcoming flu season.

Tips to protect yourself from the flu

Know the difference between the flu and valley fever