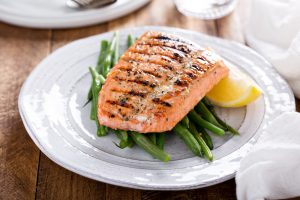 HDL cholesterol levels may be improved with the intake of fatty fish, according to research. The study found that people who increased their intake of fatty fish to at least three to four times a week had more large HDL particles – believed to reduce the risk of heart disease – compared to those who rarely consumed fatty fish.

Health benefits of eating fish are well known, but the exact mechanism of how the fats and nutrients in fish positively impact our body is yet to be uncovered.

The study found that an increased intake of fatty fish brought on the increase in large HDL particle count known for cleaning extra cholesterol off the artery walls. The researchers also noted positive changes in lipid metabolism in subjects who increased their intake of fatty fish the most. Examples of fatty fish include salmon, rainbow trout, herring, and vendace. No added butter or oil was used in the cooking process.

Postdoctoral researcher Maria Lankinen said, “People shouldn’t fool themselves into thinking that if their standard lipid levels are OK, there’s no need to think about the diet, as things are a lot more complicated than that. Soft vegetable fats and fish are something to prefer in any case.”

Supporting healthy cholesterol levels through dietary means helps reduce the need for medications such as statins, which may harbor unwanted side effects.

Here are the foods that you can easily incorporate into your heart-healthy diet to either help lower your LDL cholesterol or boost your HDL cholesterol levels.

Oats: Changing you morning meal might be the simplest way to whittle down your LDL cholesterol (the bad kind). By taking two servings of oats, you can lower LDL by 5.3 percent in only six weeks. Oats contain beta-glucan, which plays a key role in LDL removal and excretion from the body.

Nuts: A study showed that people lowered their total cholesterol by 5.4 percent and LDL cholesterol by 9.3 percent by taking 1.5 ounces of walnuts six days a week for one month. Details of the study can be gleaned from the American Journal of Clinical Nutrition. And just to make it easy for you, 1.5 ounces is about a shot glass and a half.

Tea: Tea is known to contain a lot of antioxidants to fight inflammation. In some cases, it even fights cancer. Not many people know, however, that tea is also a great defence against LDL cholesterol. According to research conducted with the USDA, black tea has been shown to reduce blood lipids by up to 10 percent in only three weeks.

Beans: Researchers at Arizona State University Polytechnic found that adding ½ cup of beans to soup lowers total cholesterol, including LDL, by up to eight percent. The fiber content in beans plays an important role in limiting the absorption of dietary cholesterol.

Olive oil: This staple ingredient of the Mediterranean diet has found its way to the shelves of grocery stores worldwide. The reason? It is full of heart-healthy monounsaturated fatty acids, which can help lower LDL cholesterol. Olive oil has the added benefit of helping keep your waistline where you want it to be.

Fatty fish: Fatty fish are loaded with omega-3s, which can help raise HDL levels. According to research from Loma Linda University, replacing saturated fats with omega-3s like those found in salmon, sardines, and herring can raise good cholesterol by as much as four percent.

Red wine: The Mayo Clinic suggests that red wine in moderation can reduce heart disease. The antioxidants in red wine increase the HDL levels to protect against artery damage.

Avocados: This vegetable/fruit is a great source of heart-healthy monounsaturated fat, a type of fat that may actually help raise HDL cholesterol while lowering LDL. And, more than any other fruit, this delectable food packs cholesterol-smashing beta-sitosterol, a beneficial plant-based fat that reduces the amount of cholesterol absorbed from food. However, too much avocado can add to the waistline.

Grass-fed meat: If you want heart-healthy meats, go for grass-fed meats. They tend to be much lower in total fat than grain-fed varieties. A sirloin steak from a grass-fed steer has almost one-third the amount of fat as a similar cut from a grain-fed steer. In fact, grass-fed meat has as little fat as a skinless chicken. Meat this lean can actually lower your “bad” LDL cholesterol levels. The other advantage of grass-fed meat is its low calorie count.

Whole grains: According to Harvard research, eating whole grains substantially lowers total cholesterol, bad cholesterol, triglycerides, and insulin levels. Any of these changes can reduce the risk of cardiovascular disease.

Many people think they are being healthy by eating multi-grain bread. This is junk food masquerading as healthy. You are much better off eating straight-up barley, brown rice, quinoa, or steel-cut oats.

Along with an HDL-boosting diet, there are other ways to raise your good cholesterol:

By following these tips, you can have greater success in improving your HDL cholesterol all the while lowering your LDL levels.