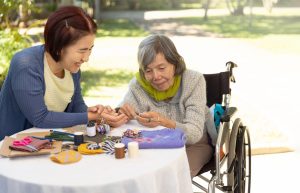 Dementia is one of the major causes of disability and dependency among older people worldwide. It is a significant concern among the aging population as cases increase in nearly every country.

Due to the increasing nature of this disease, researchers are consistently finding new ways to help reduce the risk. One such review of evidence led by UCL researchers found that feeling a sense of purpose or meaning in life could help to lower the risk of dementia years later.

The study published in Aging Research Reviews looked at whether positive psychological constructs, including positive mood and optimism, were key factors consistently associated with a reduced risk of dementia. The researchers reviewed evidence from eight previously published studies, which included data from 62,250 adults across three continents.

It was found that higher purpose or meaning in life was significantly associated with the reduced risk of cognitive impairment outcomes. These included dementia and mild cognitive impairment. Researchers noted this outcome was not the case for other positive psychological constructs, like simply having a positive mood state.

Previous studies had suggested that feeling a sense of purpose in life may be reduced with inflammation in the brain, which could be associated with a reduced risk of dementia. They also suggest that people with a higher sense of purpose in life may also be more likely to engage in activities such as social involvement and exercise, which could help to protect against dementia risk.

Georgia Bell, the first author of the study, said, “Trying to live in line with what is meaningful to you appears to have multiple health benefits – here we have found that a sense of purpose may reduce the risk of dementia, adding to other evidence linking meaningful linking to improve mental health and reduced risk of disability and heart disease.”

Healthy brain function is something that everyone should keep in mind as they age. Some degree of cognitive decline is nearly inevitable, but numerous factors can take a toll on the brain and hinder its ability to function at peak potential. The brain is under constant attack from stress and environmental factors, affecting concentration, memory, and overall cognitive function.