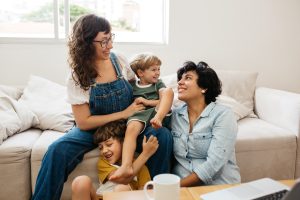 The pandemic has wreaked havoc on people’s mental health, with cases of depression among adults tripling over the past two years. But a new study shows how to help those with children reduce feelings of depression.

According to a new University of Michigan study, adults who have children in the household have fewer mental health problems compared to other adults living without kids. Those who provide childcare may even reduce the feeling of depression beyond those who have a larger household size.

Shawna Lee, director of the research lab, explained, “In other words, parents/caregivers may be struggling, but not more so than everyone else.”

The study published in the Journal of General Internal Medicine used data from 600,000 participants aged 18 – 64 years old who were given questionnaires in mid-2020. During the 12-week study, approximately 35% of the participants reported having anxiety, while 24% reported feeling depressed. These rates were much higher than pre-pandemic levels.

Women were more likely to feel more anxious than men, and researchers believe that male caregivers may be vulnerable to pandemic worries such as employment loss. The study also found that adults who are not married and have low household incomes are more at risk for depression and anxiety.

Depression comes with many symptoms and has been linked to memory problems such as confusion or forgetfulness. It can be difficult to focus on work, make decisions, or think clearly. It has also been linked with poor memory and even short-term memory loss.

During this time of high stress and rising rates of depression, it is essential to focus on healthy choices that include brain function. The Smart Pill is an excellent option for those who wish to support and maintain healthy cognitive function. A combination of Ginkgo Biloba, huperzine A, bacopa extract, rosemary extract, and a B vitamin complex provides proven support for healthy brain function.