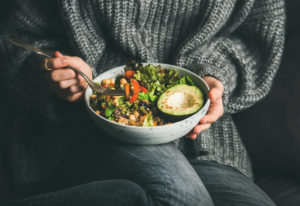 UTIs are generally caused by gut bacteria, such as E. coli, which enters the urinary tract through the urethra. This can then affect the kidneys and bladder, causing an infection.

Previous research has shown that meat is a major reservoir for E. coli strains known to cause UTIs. However, until now, there have been no studies to show whether avoiding meat reduces the risk of UTIs.

The study led by Chin-Lon Lin assessed the incidence of UTIs in 9,724 Buddhists in Taiwan who participated in the Tzu Chi Vegetarian study. This research investigated the role of a vegetarian diet on health outcomes in Taiwanese Buddhists.

Chin-Lon and colleagues found that the overall risk of UTIs was 16% lower in vegetarians than in meat-eaters. Of the 3,040 vegetarians, 217 developed a UTI compared to 444 UTI cases in 6,684 non-vegetarian participants. The reduced risk of UTI was greater in men than in women, although overall UTI risk for men was 79% lower than for women, regardless of diet. UTIs are more common in women because of the shorter length of the female urinary tract.

“We know vegetarians have a different flora in the gut. We tried to see if the infection rate of the urinary tract of the vegetarians was statistically significantly lower than the meat-eaters. And we prove that it is,” says Lin.

Researchers suggest that consuming a vegetarian diet could reduce the risk of ingesting E. coli that may cause UTIs. They also propose that the high fiber diet of many vegetarians may help to prevent the growth of E. coli in the gut. This can effectively decrease UTI risk by making the intestine more acidic.

Although this study has found that there is a very significant element in preventing urinary tract infections with diet, researchers warn there are caveats to the study that means the results are still unclear. For example, the participants of the study were Buddhists based in Taiwan, who were required to quit alcohol and smoking. These lifestyle factors were not included in the study and could potentially cause a different outcome of results.