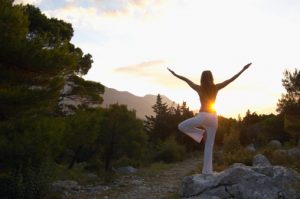 The combination of stretching and breathing exercises has a calming effect on the mind and body. They help soothe the senses and relax the muscles, combating the negative effects of stress that have built up throughout the day. These are the general practices of an exercise form called yoga, which is performed by millions of people around the world.

While yoga is great for keeping you fit while also reducing stress, a new study from the University of Waterloo suggests that a specific form of the exercise called Hatha yoga combined with mindfulness meditation can significantly improve brain function and energy levels.

More than just an exercise

Hatha yoga emphasizes physical exercises to master the body and mind, withdrawing from external objects through meditation. The exercise also highlights proper diet, processes to internally purify the body, as well as proper breathing and its regulation during yoga practices.

The researchers of this study found that those who practice Hatha yoga or mindfulness meditation for just 25 minutes a day had boosted the brain’s executive function and cognitive abilities linked to goal-directed behavior. It was also found tocontrol habitual thinking patterns and actions, as well as knee-jerk emotional responses.

Meditation has been known to reduce stress levels and possibly improve cognitive functioning. But more interesting was that both Hatha yoga and meditation were found to be effective for increasing energy levels, with Hatha yoga having significantly more powerful effects than meditation alone.


Possible reasons for the observed result

The researchers theorize that the physical exercise to which yoga subjects you can trigger the release of endorphins, increase blood flow to the brain, and aid in the removal of bothersome thoughts. However, the researchers admit that this is simply speculation and that a precise reason for the positive effects observed is currently not known.

“Although the meditative aspect might be even more important than the physical posing for improving executive functions, there are additional benefits to Hatha yoga including improvements in flexibility and strength. These benefits may make Hatha yoga superior to meditation alone, in terms of overall health benefits,” said Peter Hall, Associate Professor at the School of Public Health and Health Systems.

Related: Yoga and meditation found to prove mind-body health on a physiological level

Why you should take up yoga, tai chi, and meditation