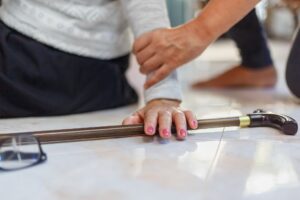 If you’re an older adult with dementia, you may be at risk for a high fall risk.

According to recent studies, half of all adults over 65 diagnosed with dementia experience at least one fall every year—a staggering statistic that’s sure to make even the most agile among us stumble. But worry not, because this blog post will explore why older adults with dementia are more prone to falling and how they can reduce their risk of injury by taking proper safety precautions. So keep on reading if you want your feet firmly planted on the floor!

Despite awareness of the link between people with dementia and falls, limited studies have examined fall risks. The previous studies that have been done overwhelmingly focus on health and function factors. According to the authors of this new study, it is the first national analysis comparing potential risk factors for falls in Americans living with dementia.

The study published in Alzheimer’s & Dementia: The Journal of the Alzheimer’s Association examined a set of potential fall-risk factors, including health, function, and environmental factors in older community-living adults in the United States. The participants included people with dementia and without dementia.

Data from the study showed that nearly half (45.5%) of older adults with dementia experienced one or more falls in 2016 compared to less than 30.9% of older adults without dementia.
Researchers found that in people living with dementia, three characteristics stood out to have a greater likelihood of falls: vision impairment, a history of falling the previous year, and living with others. For those without dementia, financial hardship, fear of falling, depressive symptoms, poor lower extremity performance, and a history of falling were all strongly associated with an increased risk of falls.

According to the research team, this study suggests that people living with dementia should be assessed for the three main characteristics that have a greater likelihood of falls. If present, these people should continue for further assessment and treatment, including assessing their environment, feet and footwear, and ability to carry out daily activities.

By screening for risk factors, people living with dementia could lower their risk of falls. This could mean an overall reduction in fall-related injuries such as fractures and hospitalization.

While some degree of cognitive decline is nearly inevitable as you age, other factors can take a toll on the ability of the brain to function at peak potential. This can affect memory, concentration, and overall brain function.

The Smart Pill can help to enhance cognitive function and memory through 9 ingredients that help to support, nourish, and maximize brain health. These include ginkgo biloba, huperzine A, bacopa extract, rosemary extract, and a B vitamin complex. This unique formula helps to boost circulation, fight free radicals, and provide nutritional support to assist with cognitive function and overall mental health.