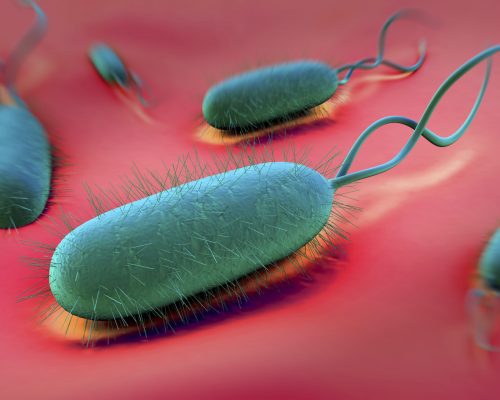 H. pylori bacteria elimination can help reduce risk of stomach ulcers, gastritis, and gastric cancer. Helicobacter pylori (H. pylori) is and infection which promotes ulcers and cancer. There are many factors which can increase stomach ulcers like smoking, alcohol, excessive salt intake and non-steroidal anti-inflammatory drugs. Researchers posed the question if H. pylori senses such damage which triggers its response and causes a trigger to disease progression.

The reduced induced small lesions in the stomachs of mice and observed H. pylori identify the damage and navigate towards it. Within minutes the bacteria interfered with healing and repair. The researchers explained, “It’s like a tag team race. Chemotactic machinery guides H. pylori into the damage site to colonize, and then other virulence factors take over to make sure the site stays just as tasty in the long term by slowing repair of any damage.”

The researchers are still unaware what triggers the signals for H. pylori to navigate towards the damaged tissue. The researchers concluded, “The broader implications of our work are that even subclinical insults to the stomach that occur in daily life (damage from grinding of food, ingestion of alcohol, taking an aspirin) can potentially attract H. pylori and not only slow repair of any existing damage, but maybe also provide an initiation site that can start the pathogenic sequence of more severe stomach diseases caused by H. pylori.”


Eliminate Helicobacter pylori to reduce the risk of gastric cancer

A 2015 study found that eliminating H. pylori with the use of two types of medication reduces the risk of gastric cancer. Individuals infected with H. pylori are at a higher risk for stomach or gastric cancer which is the third most common cause of death from cancer worldwide.

Nearly two-thirds of the population has H. pylori in their bodies but are unaware of it because it can often go symptomless for quite some time. It can be eliminated and treated with a course of antibiotics and medications.

Co-author Dr. Paul Moayyed said, “The findings of this systematic review add to the increasing evidence that eradicating H. pylori in the general population has the potential to prevent gastric cancer. International guidelines for the management of H. pylori infection may change as a result.”

To achieve their findings researchers reviewed previously published studies. The researchers found that 1.6 percent of patients given medication to eliminate H. pylori developed gastric cancer compared to 2.4 percent who were not treated. Dr. Moayyed concluded, “We feel our review provides sufficient evidence for countries with high gastric cancer rates to consider population H. pylori testing and treating. More research is needed on the extent of this effect and on any potential harms of H. pylori treatment, so any country starting screening should do pilot projects to obtain more information on these issues.”

H. pylori can be tested for in a few different ways. First a person can complete a breath test where they swallow a medication which is H. pylori is detected will turn it into carbon monoxide which you blow out. H. pylori can also be tested through the blood by measuring antibodies. A blood test will only tell you if you have the antibodies in your system but not if you currently have an infection meaning it can have a positive result for years.

A stool sample and biopsy, too, can be used to test H. pylori. In a stool sample the doctor looks for traces of the bacteria in the stool and the biopsy is conducted taking tissue sample from the stomach lining.

Your doctor may utilize one or a few of these tests in order to determine a diagnosis of H. pylori. If detected you will be put on a few different antibiotics and medications and the length of time is variable to how severe the illness it. Receiving a diagnosis early on can start treatment immediately and reduce your risk of complications associated with H. pylori.