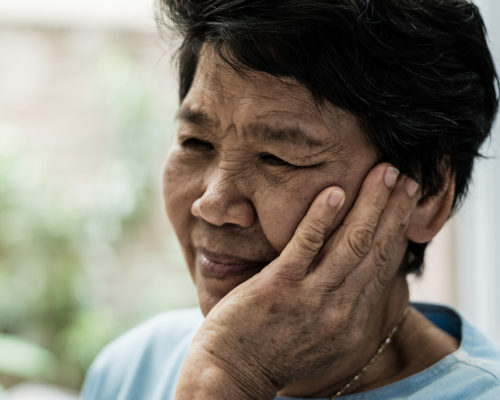 According to a new study, gum disease could be an indicator of dementia. Published in the online edition of Neurology, the study looked at the association between irreversible gum disease that can cause tooth loss and mild cognitive impairment.

Researchers looked at patient’s dental health over 20 years and found that those with the most severe gum disease at the start of the study had about twice the risk for developing mild cognitive impairment or dementia by the end of the study.

Study author Ryan T. Demmer, Ph.D., spoke about the findings, saying, “The good news was that people with minimal tooth loss and mild gum disease were no more likely to develop thinking problems or dementia than people with no dental problems.”

For the study, researchers involved 8,275 people with an average age of 63 who did not have dementia at the start of the study. Participants were assessed for mild cognitive impairment and dementia and received a full periodontal exam that included measuring gum probing depth, amount of bleeding, and recession. Participants were then grouped depending on the severity and extent of their gum disease and the number of lost teeth. They were followed for an average of 18 years.

Twice the Risk of Cognitive Impairment

“Good dental hygiene is a proven way to keep healthy teeth and gums throughout your lifetime. Our study does not prove that an unhealthy mouth causes dementia and only shows an association. Further study is needed to demonstrate the link between microbes in your mouth and dementia, and to understand if treatment for gum disease can prevent dementia,” Demmer said.

As more research is granted, studies may be able to fine-tune their findings to examine whether it is possible that cognitive decline might begin before the start of gum disease and tooth loss. It is essential for patients to realize healthy teeth and gums can affect overall health at any age.