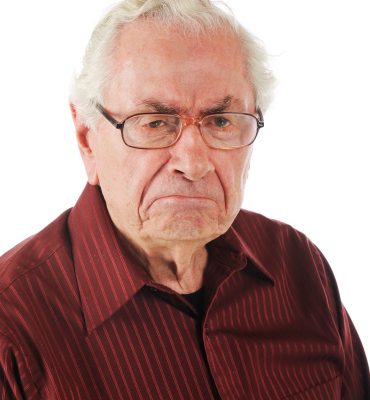 An interesting new study has suggested that the idea of “living long and happy” might actually be a stretch. As a matter of fact, the idea of the grumpy old man, or the bitter old woman might really be onto something. The study suggests that those who don’t have high hopes for a happy and prosperous future, might be more likely to find themselves living longer.

Compared to people who have an outlook of optimism, or who are generally more sunny in their mental health, older people who live longer tend to have worse, and/or more pessimistic attitudes.

The findings of the study showed that not only did people who are more pessimistic more liking to live longer but people who have more happy or sunny outlook tend to have a much greater risk of disability, and even death within the 10 years following.

One theory is that people who are less optimistic are by default more realistic about the direction their life is headed, which could lead them to making better, and more informed choices with their health, as well as participating in more streamlined safety precautions.

The Study Numbers on How to Live Longer, Aging and Happiness

The team of researchers looked at a group of over 10, 000 German people between the years of 1993 and 2003 and the results didn’t focus on a particular age, but took rather broad strokes with the age group only being narrowed between the ages of 18-96 years old. The poll asked the group several questions about their levels of satisfaction with their lives, as well as asking them to predict how they would feel in the longer term, say up to five years down the line. Respondents were asked to put their answers on a scale of 0-10.

The Optimistic vs. Pessimistic Numbers on Aging are Interesting to Note

The older population of people in the study (over age 65 years old) tended by a landslide to have pretty low expectations about their future, and even less so when asked to predict up to 5 years ahead. Only about 25% had accurate ideas about how their future turned out.

Researchers said they found that people who were in a pretty good place in life (stable income and health) had stronger associations with a decline in their lifestyle compared to those who had poor health and/or income. Another interesting point of mention is that the more money people made, the greater the risk of the individual having problems with a future disability.

The idea that a grumpy old man could potentially live longer because of this fact (being pessimistic or grumpy) is a shocking one. And the theory of how a pessimistic person could live longer than an optimistic one was interesting enough, to have a full research study done on it. For a full idea of the findings of this study, and the people involved, as well as the optimistic vs. pessimistic outlook can be viewed online in the journal Psychology and Aging.