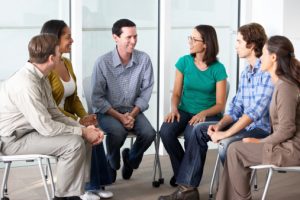 Researchers from Mount Sinai Hospital found that group therapy was an effective way to promote cardiovascular health. The findings were presented at the AHA scientific Sessions 2015 in Orlando, Florida. Dr. Valentin Fuster, lead researcher, said, “Peer group support is a proven strategy for addressing substance abuse, eating disorders and chronic illness. We now have proof that peer group support also helps improve healthy behaviors in people who are at a higher risk for cardiovascular issues and has a significantly positive impact on smoking cessation.”

Researchers followed 543 adults between the ages of 25 and 50 who had at least one cardiovascular disease risk factor: hypertension, high body mass index (BMI), smoking and physical inactivity.

Over the course of three months participants were part of training and motivational groups that promoted healthy lifestyle habits. The groups focused on motivation for change, stress management, smoking cessation, healthy eating, regular exercise and managing blood pressure. After the starting point, the group was divided in two: 277 were part of an intervention group and 266 were the control. Over a 12-month period the intervention group met on a monthly basis to change behaviour, boost attitudes and create awareness about cardiovascular health. The control group received medical check-ups during the same period.

After the initial start of the program, 71 percent of participants saw progress on the FUSTER-BEWAY index, which is a composite score related to blood pressure, exercise, weight, BMI, fruit and vegetable consumption and smoking.

The researchers concluded that although education is important when it comes to promoting cardiovascular health, if a person is not re-enforced, she/he will begin to trail off and not follow the plan as closely. Therefore, group therapy may be an effective way to promote cardiovascular health for those who are at risk, instead of simply prescribing medications.

Dr. Fuster concluded, “We are currently evaluating peer-group intervention programs in different national and international socio-economic communities to see if the results are consistent.”

The findings will be published in the Journal of American College of Cardiology (JACC).