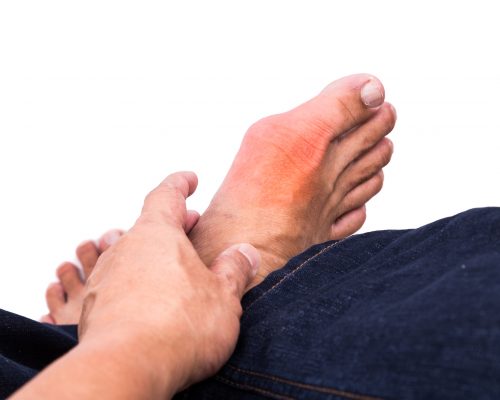 Gout treatment is safe with oral steroids or nonsteroidal anti-inflammatory drugs (NSAIDs). The researchers compared the steroid prednisolone with the arthritis medication indomethacin and found that both offered similar levels of pain relief in gout. Although the arthritis drug did cause minor side effects, neither treatment led to complications.

Dr. Philip Mease, a rheumatologist with the Swedish Medical Center, not involved in the study, commented, “That is the key message – that there are options. Sometimes, ER docs don’t think about giving a tapering dose of prednisone, but it can be very effective at helping with gout, which can be damn painful.”

Gout is an inflammatory arthritis caused by the buildup of uric acid, which forms crystals in small joints – commonly the big toe. Gout can be quite painful when flares occur, sometimes even making walking near impossible.

The study looked at over 400 males in Hong Kong with gout. Nearly half of the participants had hypertension, and nearly three-quarters had recurring gout attacks. Nearly 10 percent were taking a prescription drug known as allopurinol (Zyloprim) as a means to reduce uric acid.

Both treatments offered comparable relief from gout pain. Minor side effects were seen in the NSAIDs group, including nausea, dizziness, abdominal pain, and lethargy, but no significant complications were found.

The researchers noted that similar effects may not be seen in other NSAIDs such as ibuprofen or aspirin, so additional research is required to evaluate their effectiveness.

Gout can be serious if it goes untreated. It can lead to the destruction of joint surfaces and cause joint deformity, as well as tophi – the buildup of painful uric acid crystals in the joint. Gout medications can be used to treat attacks and prevent future episodes, including the development of tophi.

Some doctors will prescribe their gout patients nonsteroidal anti-inflammatory medications to help calm the inflammation and pain, but there are also medications designed specifically for gout pain. Corticosteroids are also used to treat gout.

When gout attacks are frequent, doctors may suggest medications that block uric acid production. There are also treatments that will improve uric acid removal from your body, but it is important to review the possible side effects of these medications with your doctor.

There are also lifestyle changes and home remedies you can try to treat symptoms of gout. Here are natural ways to reduce gout:

What is gout (gouty arthritis)? Causes, symptoms, diagnosis, and treatment