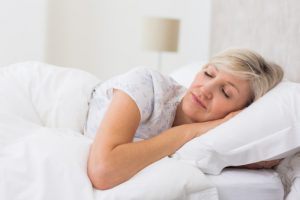 A good night’s sleep may improve memory due to brain activity in hippocampus. Researchers from Bristol’s Center for Synaptic Plasticity uncovered additional benefits of a good night’s sleep. The findings are important because poor sleep is a pressing issue in our society and has been linked to health problems such as Alzheimer’s disease and schizophrenia.

The findings revealed that patterns of brain activity that occur during the day are replayed rapidly during sleep. This replay occurs in the hippocampus where our memories are filed. Sleep replay is important because it strengthens microscopic connections between nerve cells that are active – a critical process for consolidating memories.

Lead researcher Dr. Jack Mellor said, “‘These findings are about the fundamental processes that occur in the brain during the consolidation of memory during sleep. It also seems that the successful replay of brain activity during sleep is dependent on the emotional state of the person when they are learning. This has major implications for how we teach and enable people to learn effectively.”


During sleep, memory accuracy and strength can be altered, previous study

Findings from NYU Langone Medical Center suggest that memory accuracy and strength can be altered. For example, our ability to recognize an odor is based on the brain’s ability to learn, process, and recall it during slow-wave sleep.

Sense of smell is one of the first senses to start failing in many neurodegenerative disorders. By understanding how the brain learns about odors, researchers believe it can help to develop therapies to enhance memory consolidation and accuracy.

The researchers found that odor memory in rats was strengthened when odors experienced the previous day were replayed during sleep. Memories of odors deepened when the odor was replayed during sleeping hours as opposed to the results of odor replay when the rats were awake. Compared to rats that did not get a replay of the odor, those rats who did during slow-wave sleep had better recall of it the following day.

When the rats were exposed – while asleep – to a replay of odor they did not previously learn, it created false memories of different odor patterns.

The rats were initially trained to recognize odors through conditioning by using electrodes in the olfactory bulb, which is the part of the brain that perceives odor. The researchers stimulated different odor perceptions. This was then replayed electrically in order to detect the effects of slow-wave sleep and memory.

Memory of odor was enhanced when replayed during slow-wave sleep compared to when the rats were awake.

Study senior author Donald A. Wilson said, “Our findings confirm the importance of brain activity during sleep for both memory strength and accuracy. What we think is happening is that during slow-wave sleep, neurons in the brain communicate with each other, and in doing so, strengthen their connections, permitting storage of specific information.”