Home » Heart Health » Gluten free? You may be at risk for this 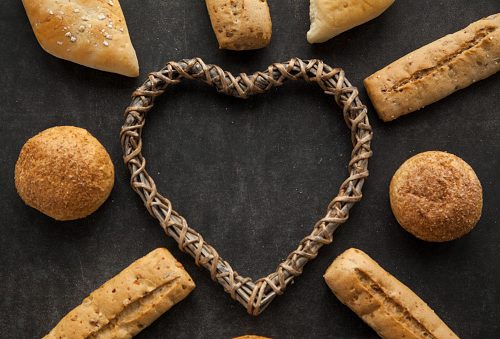 If you’ve ever watched a pizza maker toss a pizza high in the air or a seasoned noodle maker stretching a single ball of dough into thousands of strands, you might have marveled at their dexterity. While there is definitely some skill involved, the real hero is a protein component in the mix that lends the dough its elasticity—gluten.

But over the last decade, the hero has become a villain, as the term “gluten-free” has invaded our collective consciousness and has become synonymous with health.

The fact is, a gluten-free diet should only be adopted by people with celiac disease, an autoimmune disorder of the small intestine that is characterized by a high sensitivity to gluten.

Given that only one to two percent of Americans has celiac disease, the huge interest in gluten-free food seems uncalled for. To make some sense of it, researchers at Harvard Medical School decided to see whether avoiding gluten actually has health benefits for those without the disease.

Going gluten-free may raise your risk of heart disease

The researchers knew that celiac disease is associated with an increased risk of coronary heart disease and that the risk reduces when the individuals go gluten-free.

As part of the study, the research team led by Dr. Andrew Chan, an associate professor of medicine at Harvard, analyzed data collected from 110,000 health professionals over 26 years to link estimates of gluten in the diet to diagnoses of coronary heart disease.

The data was sorted into five groups based on estimated gluten consumption. The results of the study revealed that increased intake did not raise the risk of heart disease in individuals.

According to the lead researcher, doctors and medical researchers have an understanding of the mechanisms that trigger gluten to cause a hypersensitive reaction (allergy) in people with celiac disease. But since those mechanisms don’t occur in people without the disease, the findings of the study aren’t surprising.

On the contrary, those individuals that actually had a low intake of gluten also tended to consume less whole grains, which in turn increased their risk of developing heart disease.

The research team concluded that there is really no evidence that attributes heart health to reduced gluten intake, but they were concerned that an overly restrictive intake of gluten could also limit your intake of whole grains, which could cause harm.
But the researchers could not pinpoint a conclusive cause and effect as (a) the study was observational and the participants weren’t randomly assigned to follow a specific diet, (b) the researchers didn’t test for impact of gluten among people with celiac disease, and (c) the team did not determine whether trace amounts of gluten were present in some foods.

Given the nature of the study, Dr. Chan stressed that these findings should not be used to alter recommendations for people with celiac disease or gluten sensitivity.

In a different assessment not related to the above study, Shelley Case, a registered dietitian in Regina and a member of the professional advisory council for the Canadian Celiac Association, reported that while gluten-free diets can help promote weight loss, eliminating gluten can also lead to weight gain if gluten-rich foods are substituted for gluten-free items that are high in fat, sugar, and calories. According to Case, “Going gluten free is not a magic bullet for losing weight and improving your health for individuals who don’t have celiac disease.”

Whether or not the new findings help people become a bit more prudent about going gluten-free, time alone will tell. But if you don’t have celiac disease and if it doesn’t run in your family, you can go ahead and enjoy some gluten.

Related: 10 ways to lower your risk of heart disease