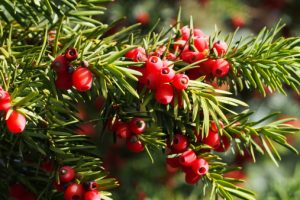 Researchers from the University of Guelph have uncovered a way to produce cheaper anti-cancer drugs with the use of fungi. The study reveals the benefits of naturally growing fungi from yew trees, which work like a bandage for the immune system of the plant.

Taxol comes from yew bark and is an essential part of anti-cancer drugs, but attempts to make synthetic versions have been unsuccessful.

The researchers have found that harvesting fungi to produce more Taxol will make it easier to meet the demand, which researchers call the “holy grail” for cancer treatment.

Scientists have often wondered why yew trees and fungi produce Taxol, but researchers discovered it has to do with their ability to grow branches. Yew branches bud from underneath the bark. Cracks form deep within the yew tree’s vascular system, which allows fungi to enter. This fungi in the yew tree acts as an immune system bandage, which protects it from pathogens.

The researchers hope to learn more about the yew trees and its fungi, and they believe the research may better help the agriculture and forestry sectors.

The findings are published in Current Biology.