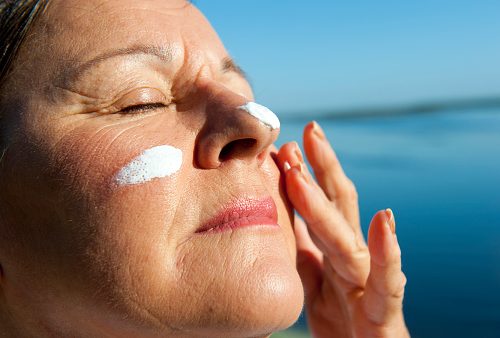 It’s almost that time of year when the weather is warm and the sun is bright. We often make the effort to spend more time outdoors, maybe go visit the local beach and soak up some rays. Having fun in the sun doesn’t mean we neglect our safety, as we’ve been told time and again to protect our skin from UV radiation by using sunscreen. As you know, prolonged exposure to the sun’s harmful rays can lead to sunburns, premature aging, and even increase one’s risk of developing skin cancer. However, according to new research, this strict adherence to the use of sunscreen has led to widespread vitamin D deficiency.
There are two ways of obtaining vitamin D: one is to simply ingest it in the diet or through supplementation, the other is to expose your skin to sunlight. You don’t need to get a tan to reap the effects of this exposure, as the process of vitamin D production in the skin occurs very quickly.

It is estimated that sufficient time is about half the duration it usually takes for your skin to begin to burn when under the sun. As you can imagine, this may mean different times for people of varying skin tones, as those with darker complexions generally have to spend more time in the sun to achieve adequate vitamin D production. Vitamin D is known for its role in many bodily functions such as cell growth modulation, neuromuscular and immune function, and inflammation reduction.

The present study found that 95 percent of African American adults may have vitamin D deficiency or insufficiency, with differences in skin pigmentation among races accounting for vitamin D variation. If poorly managed, deficiency of vitamin D may lead to muscle weakness and bone fractures. Chronic disease may also play a part, as conditions like type 2 diabetes, kidney disease, Crohn’s, and celiac disease, lead to significant levels of malabsorption of the vitamin. The study concluded that nearly one billion people worldwide have a deficiency or insufficient levels of vitamin D due to chronic disease or inadequate sun exposure related to sunscreen use.
“People are spending less time outside and, when they do go out, they’re typically wearing sunscreen, which essentially nullifies the body’s ability to produce vitamin D… While we want people to protect themselves against skin cancer, there are healthy, moderate levels of unprotected sun exposure that can be very helpful in boosting vitamin D,” said Kim Pfotenhauer, assistant professor at Touro University and a researcher on this study.

The researchers recommend spending five to 30 minutes in midday sun twice a week to aid in increasing and maintaining healthy vitamin D levels, but this depends on where you live and your skin pigmentation. The lighter the skin, the faster the vitamin D synthesis can occur, with the opposite being true for darker individuals. The researchers also stress that sunscreen should not be used during these brief sessions, as it negates the vitamin-producing action in the skin. Foods may also be a great source of obtaining vitamin D, including milk, breakfast cereals, and Portobello mushrooms.

There is much debate on whether vitamin D deficiency may lead or be a contributor to various chronic conditions such as multiple sclerosis, infections, or cardiometabolic disease, with ongoing research aiming to discover any correlations.

“Science has been trying to find a one-to-one correspondence between vitamin D levels and specific diseases… Given vitamin D’s ubiquitous role in the body, I believe sufficient vitamin D is more about overall health. Our job as osteopathic physicians is to recognize those patients that need to be tested and treat them accordingly,” said Dr. Pfotenhauer.