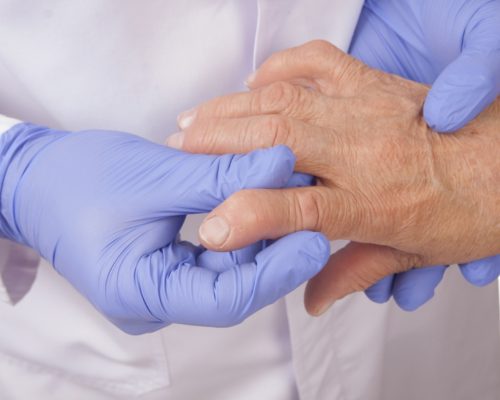 According to a new study published in Bone, patients who have a high frailty status alongside rheumatoid arthritis (RA) may be more at risk of osteoporotic fractures. Those with RA do have an increased risk of skeletal bone loss, which could be a reason for the increased risk of fractures.

Previous studies have shown frailty in those with RA may increase the risk of future adverse health outcomes. It is a condition that can affect social, psychological, and physical function. However, there has been limited data available about the association between frailty and the risk for other health problems in patients with RA.

Rheumatoid arthritis is a chronic inflammatory disorder that affects more than two million Americans, mostly women. Along with joint inflammation and pain, many people experience fatigue, loss of appetite, and a low-grade fever. Because RA is a systemic disease, it may also affect organs and body systems.

Although many people know of the symptoms of RA, they are often unaware of a condition called rheumatoid cachexia, a medical term associated with extreme muscle wasting, frailty, and loss of strength. Simply put, “cachexia is a loss of lean muscle mass along with an increase in fat tissue,” says Kimberly Steinbarger, the academic coordinator of clinical education at the School of Physical Therapy at Husson University in Bangor, Maine. This condition can be one of the main contributors of frailty in those with RA.

The Association between Frailty and Osteoporotic Fractures

This study to investigate the association between frailty and the risk for osteoporotic fractures in patients with RA was based on data from the Ontario Best Practices Research Initiative. The initiative is a clinical registry of patients with rheumatoid arthritis in Ontario, Canada. It included 2,923 participants of which 78 percent were women.

Researchers looked at patients who had less than two visits between January 2010 and December 2016. They categorized outcomes into two different categories. The initial outcome was a first incident osteoporotic fracture, and the second was hospitalization for any cause during follow-up. It was shown that 125 new osteoporotic fractures were documented, including 21 forearm or wrist fractures, 10 spine, 12 hip, 8 shoulder, 16 ankle, 13 foot, 11 rib, 7 femur, 6 elbow, 4 pelvis, and 17 other fractures.

Frailty was assessed using the Rockwood-type frailty index in patients with RA. The index for this study was made up of 32 health-related deficits rated from 0 to 1, with a higher total frailty index pointing to greater frailty.

Researchers did point out some possible limitations in the observational study such as the lack of information regarding radiologic imaging such as bone mineral density measures. This means they were unable to determine whether frailty was related to osteoporotic fracture risk independent of bone mineral density.

The study was concluded by researchers saying, “Our study demonstrates that higher frailty status is significantly related to increased risk of osteoporotic fractures in patients with rheumatoid arthritis. Quantifying the frailty status as a research tool may aid in fracture risk assessment, management and decision-making in RA.”