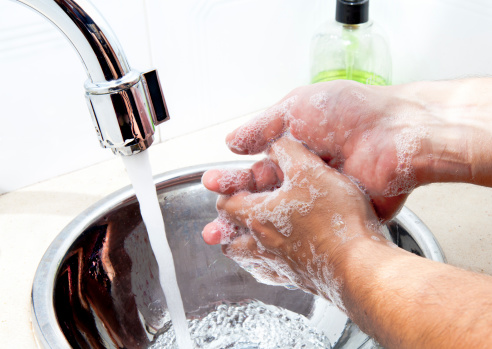 Now more than ever, we are obsessed with ‘cleanliness’. Although cleanliness is traditionally thought to be a healthy attribute, modern medicine is now beginning to change it’s tune with the “Hygiene Hypothesis.” The Hygiene Hypothesis not only claims that a bit of dirt could be good for you, but also raises concerns that all these years of obsessive hygiene could actually be responsible for our declining states of health.

Before you pump out another squirt of that antibacterial hand sanitizer, find out why you may want to make some mud pies instead.

How Cleaning Attacks Your Immune System

Contact with bugs, dirt, and harmless micro-organisms such as bacteria and fungi was once a natural part of daily life in earlier societies. Regular exposure to these microorganisms allowed the human immune system to become “accustomed” to them, hence training it to tolerate other harmless micro-organisms. The result is a developed desensitization to common things like mold, dust or pollen, teaching our bodies to handle them without “over-reacting.”

But if people never get the opportunity to experience regular, mild microbial exposure, than this immune training doesn’t occur.  Excessive cleanliness (especially during childhood) prevents desensitization of the immune system from ever occurring,  causing it to overreact to otherwise harmless substances and throwing your body into attack mode when it doesn’t have to be. The hygiene hypothesis proposes that this is the reason why allergies are more prevalent than ever before, and why someone can be allergic to hundreds of harmless substances.

Cleanliness can also increase inflammation levels in the body, as the immune system goes into overdrive while constantly trying to ‘protect’ the body from harmless invaders. Inflammation increases the risk for chronic diseases such as cancer, diabetes, irritable bowel disorders, multiple sclerosis, heart disease, primary biliary cirrhosis and Alzheimer’s.

According to a study published in the journal Archives of General Psychiatry, excessive inflammation caused by an overly clean society can also increase the risk for depression. “We have known for a long time that people with depression, even those who are not sick, have higher levels of inflammation,” explains study author Charles Raison. “There is mounting evidence that disruptions in ancient relationships with micro-organisms in soil, food and the gut may contribute to the increasing rates of depression.”  And depression isn’t the only mental problem associated with being overly hygienic; chronic anxiety and a range of other mood disorders may also be connected to excessive cleanliness.

The Impact on the Immune Systems of Future Generations

Our obsession with cleaning away any chance of childhood infections may have backfired when it comes to our children’s long-term health. A study conducted on 700 adults found that viral infections in early childhood may reduce the risk for heart disease later in life. In fact, participants who had two childhood viral infection had a 40 percent reduced risk of coronary heart disease, and those who had six viral infections had a 90 percent lower risk. This is a profound statistic, considering the fact that heart disease is the leading cause of death in North America.

Moreover, your body has a strong, natural ability to combat many viral infections, so antibiotics should only be used when absolutely necessary. This is because the intake of antibiotics not only kills off the harmful bacteria, but also kills off the “good” bacteria in our guts, that are necessary for healthy digestion and proper immune functions.

Excessive skin cleanliness is another practice that can cause more harm than good. Scientists warn that bacteria on the skin’s surface are required to prevent rashes; therefore, over cleaning the skin impairs its ability to stay healthy. Over cleaning can also dry out the skin, increase the formation of wrinkles, worsen eczema and cause acne, which is likely what people are striving to avoid by over-cleaning their skin in the first place.

So only use antibiotic hand and face wash in moderation, take antibiotics as an absolute last resort, and increase your intake of probiotic rich foods—these measures may make the difference between chronic bouts of illness and a clean bill of health.