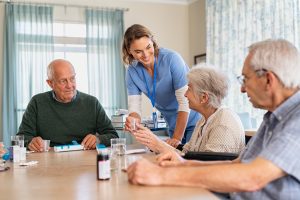 A nutrient-packed diet isn’t just great for your body. It can protect your brain, too.

A healthful, nutrient-rich diet can help blood and oxygen get to your brain, as well as protect brain cells, help reduce the risk of memory and thinking trouble, and potentially lower the risk for memory loss.

But are there specific nutrients or food groups that can help encourage and maintain and a healthy brain?

The research, financed by the National Institute on Aging (NIA), found that people who have the highest levels of three specific antioxidants in their blood are less likely to have memory issues than those with less.

The antioxidants that are believed to support brain health and memory are lutein, zeaxanthin, and beta-cryptoxanthin.

Lutein and zeaxanthin are found most notably in leafy green vegetables like kale, spinach, broccoli, and peas. Beta-cryptoxanthin is in orange-colored fruits like oranges, papayas, tangerines, and persimmons.

Researchers collected their data by studying 7,300 adults aged 45 to 90 who had a physical exam, interview, and a blood test for antioxidant levels. They were then divided into three groups based on antioxidants in their blood and followed for an average of 16 years.

Every increase in the standard deviation of antioxidant levels in the body was associated with a 7 percent decrease in memory issues.

Of course, the study was observational in nature and does not prove that food choices can reduce the risk of memory issues. Further, once factors like activity, education, and income came into play, the impact of nutrition was lessened.

That’s not to say that a healthy diet doesn’t influence brain health, only that it is not the sole factor in reducing the risk for memory loss.

If you want to give yourself the best chance to preserve your brain and memory, eating an antioxidant-rich diet may help, but you’ll likely have better results if you exercise.