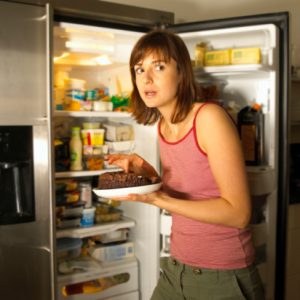 When we feel our stomach growl, it’s a signal that we need to eat something soon. Likewise, when we have eaten a meal and feel full, our body tells us that we don’t need to eat anymore. However, a new study suggests that these feelings could be learned in the opposite manner.

“We already know that extreme diets are susceptible to fail. One reason might be that the inhibition of eating learned while dieters are hungry doesn’t transfer well to a non-hungry state. If so, dieters might ‘relapse’ to eating, or perhaps overeating, when they feel full again,” says psychological scientist Mark E. Bouton of the University of Vermont, one of the authors of the study.

Testing out the hypothesis

A behavioral study using rodent models was carried out to test the researcher’s hypothesis. A total of 32 female rats were chosen, and every 12 days, rats who were satiated participated in a 30-minute conditioning session.
This session involved rats being placed in a box that contained a lever. They were conditioned to expect treats when pressing on a lever.

Over the next four days, the same rats were placed in the same box while hungry, but this time, the lever did not produce treats when pressed.

The experiment was designed to test if the rat’s behavior for wanting food could be changed no matter their state of satiety. Through these two phases, the rats were conditioned to associate satiety with receiving tasty food, and hunger with receiving no food. However, when tested again, the researchers found that the rats pressed the lever more often if they were full than if they were hungry.


“Rats that learned to respond for highly palatable foods while they were full and then inhibited their behavior while hungry, tended to relapse when they were full again,” Bouton explains.

Essentially, the researchers proved that the rat’s internal states, rather than the presence of food, provoked their learned behavior. Their relapse was evidence of this, as it emerged even when food was removed from the cage before the learning and unlearning sessions.

The result of this study has shed light on food seeking behavior. This could help explain the origins of obesity and even anorexia. These food-related behaviors may even go beyond our own physiological cues, such as a growling stomach.

“Like sights, sounds, and smells, internal sensations can also come to guide behavior, usually in adaptive and useful ways: We learn to eat when we feel hunger, and learn to drink when we feel thirst. However, internal stimuli such as hunger or satiety may also promote behavior in ways that are not so adaptive,” says Schepers and Bouton.

These foods are full of health-boosting antioxidants
Healthy gut diet: Foods to eat and avoid