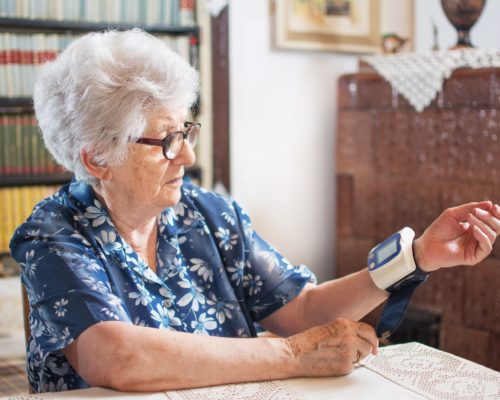 Do you put off exercising because you simply don’t have the time? Exercise is essential to support good health, especially when it comes to controlling blood pressure. Although it is recommended to exercise at least 30 minutes a day to improve your health, you may only need five minutes of exercise a day to start improving your blood pressure.

Researchers at the National Institute on Aging are learning more about a time-efficient exercise known as Inspiratory Muscle Strength Training (IMST). Researcher Daniel Craighead explained, “It’s basically strength-training for the muscles you breathe in with. It’s something you can do quickly in your home or office, without having to change your clothes, and so far, it looks like it is very beneficial to lower blood pressure and possibly boost cognitive and physical performance.”

IMST was developed in the 80s as a means to wean critically ill patients off ventilators. IMST involves vigorously breathing through a hand-held device that provides resistance. It can be described as sucking through a straw while the straw is sucking back.

This exercise was mainly used in patients with lung diseases as a means of improving their lung strength and capacity. Other studies have shown that IMST may also help improve sleep apnea.

Among sleep apnea patients, researchers found that systolic blood pressure improved by nearly twice as much as it did when performing aerobic exercise and taking medications. This prompted researchers to investigate further the benefits of IMST on blood pressure.

Although the current study is still underway, it is now halfway completed. The researchers have found that IMST is linked with improved systolic blood pressure numbers – this is the pressure leaving the heart. IMST patients are also showing improved results in memory and cognitive tests.

These patients are now able to perform on the treadmill longer than those not using IMST.

Craighead added, “We suspect that as you improve the function of your respiratory muscles, they don’t need as much blood to work and that blood can be redistributed to your legs, so you exercise longer.”

IMST may be a more efficient and long-term beneficial method of improving blood pressure numbers. It’s still important to note, though, that regular exercise is an integral part of maintaining good health and adults should still aim for at least 30 minutes of activity a day.