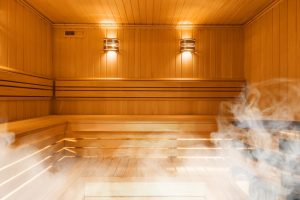 A new study has found that frequent sauna users may have a reduced risk of heart and lung disease than those who rarely find themselves using a sauna. Studies on the health benefits of using saunas have previously been mixed, but the researchers behind the current study chalk this up to a lack of long-term reviews.

The current study focused only on the type of sauna commonly used in Finland, where the study was performed. In Finnish culture, sauna use is much more ingrained in the daily lives of people than it is in North America. The saunas examined were generally kept between 80 and 100 degrees Celsius, with a relative humidity of only 10 to 20 percent, meaning the air is fairly dry inside.

Since routine use of saunas is much more common in this area of the world, the researchers were able to gather a reasonably sized population for the study. They found that consistent use of saunas resulted in long-term health benefits, including lower risk of many chronic diseases and lower risk of all-cause premature mortality.

“Beyond pleasure and relaxation, evidence suggests that sauna bathing has several health benefits, which include reduction in the risk of vascular diseases such as high blood pressure, cardiovascular disease (CVD), stroke and memory diseases,” said study lead author Dr. Jari Laukkanen of the University of Jyvaskyla in Finland. “Sauna is also related to a lower risk of pulmonary diseases including asthma, pneumonia, and chronic obstructive pulmonary disease.”

The study gathered its data from a pool of already published research, analyzing the results for any common links. One study of 2,315 adults found that regular use of saunas was associated with a 50 percent lower risk of cardiovascular disease or coronary heart disease and a 40 percent decrease in the risk of premature death from all causes. Two other studies found that using a sauna four times a week or more resulted in a 41 percent decrease in the risk of respiratory diseases and a 37 percent lower risk of pneumonia.

Overall, beneficial results of frequent sauna use were seen across many of the studies that the researchers analyzed. They found the benefits of sauna bathing to include lower blood pressure, inflammation, oxidative stress, circulation of bad cholesterol, and stiffness in the arteries. This may be due to the body’s natural response to heat: blood vessels dilate, allowing blood to rise closer to the surface of the skin. This causes the heart to beat faster, meaning that blood is being circulated throughout the body at a faster rate, which has been previously linked to increased blood vessel health.

The researchers do caution users, however, as extended sauna sessions can result in very low blood pressure and dizziness. If you intend to introduce sauna use into your regular health routine, consult your doctor about the length of time you should spend inside a sauna and how often you should use one.