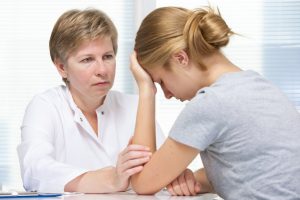 Study author Susmita Kashikar-Zuck said, “Half of the former teens we studied met the full criteria for adult fibromyalgia, and another 35 percent of them continued to have symptoms of fatigue, pain, and sleep difficulty, but did not meet all the criteria for fibromyalgia syndrome.”

Fibromyalgia still remains a large mystery, as Kasikar-Zuck explained, “It appears to be caused by a pain hypersensitivity in the central nervous system. It’s sort of like the volume is turned up on pain, and now they are exquisitely sensitive to pain.”

Although the cause of fibromyalgia is unknown, doctors have seen that teenagers with fibromyalgia often have a fibromyalgic parent as well.

Over two-thirds did not meet the criteria for fibromyalgia diagnosis, but still complained of the specific symptoms related to fibromyalgia.

Dr. Anne Eberhard, a pediatric rheumatologist at Cohen Children’s Medical Center of New York, said, “It is not surprising that the symptoms are still seen and persist into early adulthood, where major life decisions are being made.”

The study reveals the importance of diagnosing fibromyalgia in its early stages for treatment to begin as soon as possible.


Fibromyalgia may be worse on young people than older patients, study

Fibromyalgia may be worse on younger people than older patients, according to research. Fibromyalgia is a condition characterized by widespread musculoskeletal pain, which can take a negative toll on a person’s day-to-day life. The impact of fibromyalgia can be particularly detrimental in younger individuals.

For the study, 978 patients were divided into three age groups: under 39, 40 to 59, and over 60. Younger and middle-aged patients were more likely to be employed, unmarried, smokers, have higher education, and lower body mass index.

The findings surprised researchers because older adults typically have poorer quality of life.

The study was presented in 2013 at the American College of Rheumatology’s annual meeting in San Diego.

Fibromyalgia and chronic fatigue syndrome (CFS) are two conditions that are often mistaken for each other because of their numerous similarities. At the same time, there are some key differences that distinguish one from another, and these differences help doctors properly diagnose one or the other. Continue reading…

Fibromyalgia pain can be eased with lidocaine painkiller injection and Lyrica drug, according to research. Fibromyalgia is a condition characterized by widespread musculoskeletal pain and a heightened sensitivity to pain. Because it does not have a clear-cut cause, fibromyalgia is quite challenging to treat. Continue reading…