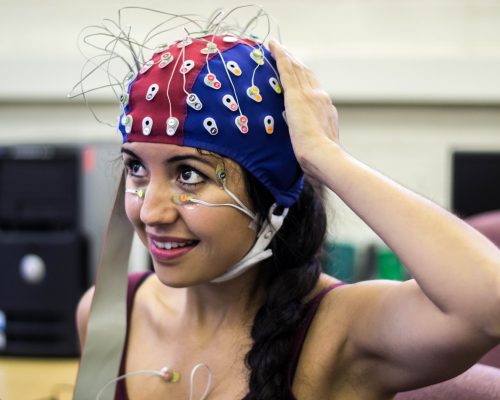 Lead researcher Dr. Eric Guedj said, “This improvement is associated with an increase in brain metabolism, which argues for a physical cause for this disorder and for the possibility of changes in areas of the brain to improve the symptoms. Previous studies in patients with fibromyalgia have suggested an alteration of brain areas is involved in the regulation of pain and emotion.”

During the treatment patients wear a cap lined with electrodes which send small electrical charges to targeted areas of the brain. By stimulating these areas it alters how they will react.

Dr. Alan Manevitz added, “Fibromyalgia is the most frequent cause of widespread pain, and affects 6 to 12 million people in the United States.”

It has been long believed that fibromyalgia was a mental problem but numerous studies show it has physical origins. In fact it is a physical problem which is associated with changes in mood not vice versa.

Improvements were seen in mood, emotional measures, and social areas like work and gatherings.

At the beginning of the study average quality of life scores were 60 out a possibly 100 – in this measurement lower scores indicate better quality of life. After brain stimulation scores dropped on average 10 points but those who received sham stimulation had points go up.

The study showed an association between magnetic brain stimulation and not cause-and-effect.

Magnetic brain stimulation has been found to help improve depression outcomes. The technique is approved for those who cannot tolerate antidepressants or who do not respond or benefit from antidepressants. It typically targets specific areas of the brain to alter how it works such as the mood area.

A cap is placed on the patient’s head where painless magnetic pulses are sent to target the area of the brain which controls mood. Although the patient doesn’t feel what is going on the technique actives neurons to fire up or become active. These areas of the brain which are targeted are usually underactive in depression and so when activity occurs symptoms become relieved.

The treatment occurs over numerous weeks with several sessions and although it is generally safe for everyone it should not be used in patients with free-floating metal in their head.

To see if magnetic brain stimulation is the right course of treatment for your depression speak to your doctor.

Fibromyalgia, chronic fatigue syndrome can be improved with vitamin B12 and folic acid: Study

New research suggests that fibromyalgia and myalgic encephalomyelitis (also known as chronic fatigue syndrome) can be improved through therapy based on vitamin B12 and folic acid. Continue reading…