Home » Weight Management » Exercise » Feel you’re losing your memory? This could be a simple fix 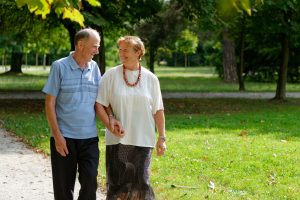 Have you completed your recommended 30 minutes of brisk walking today?

Regular exercise is a common theme when it comes to protecting your health as you age. It is beneficial in many ways and supports day-to-day brain function. It turns out, getting that heart rate going boosts your brainpower, improving your overall memory and ability to learn as you grow older, new evidence suggests.

Who says you can’t teach an old dog new tricks?

It’s never too late to start an exercise program, and you’ve got all this brainpower still available as you age. With age-related dementia and Alzheimer’s disease on the rise, this is news you can put to good use.

Get moving to improve your memory

According to the “Cardiovascular Risk Factors, Aging and Incidence of Dementia” study recently conducted by the University of Eastern Finland, aerobic exercise increases the hippocampus, the part of the brain responsible for verbal memory and learning. Published by the British Journal of Sports Medicine in April, the study examined the effects of physical activities on 86 women — between the ages of 70 and 80 — who all reported having age-related memory issues. These are considered to be mild cognitive impairments and can often lead to dementia.

For six months an equal number of participants was asked to train aerobically, like walking briskly; participate in resistance exercises, like lunges, squats and weights; or work on their balance and toning their muscles. Less than 30 of them underwent MRI scans before and after.

Dementia is a brain disease characterized by the loss of clear thinking and reasoning. In most cases, it’s severe enough to affect a person’s everyday functioning. The most common form of dementia is Alzheimer’s, followed by dementia with Lewy Bodies, vascular dementia and frontotemporal dementia, as well as progressive supranuclear palsy, corticobasalar, normal pressure hydrocephalus and Creutzfeldt-Jakob disease.

The disease is becoming more common these days as more and more people live to a ripe old age. As a result, nearly half of all people over the age of 85 have some form of dementia, according to the Centers for Disease Control and Prevention (CDC). The number of those beset by the disease is expected to increase to more than 115 million by 2050.

Speed up your steps to slow down memory loss

Participants’ socioeconomic backgrounds, weight and medical history were not taken into account during the study, therefore further research is needed. Researchers are convinced that aerobic exercise can help slow the decrease of the hippocampus in women who are at risk of developing dementia.

Just like I always tell my patients, and have also heard from many colleagues of mine, regular physical activity still remains one of the most important things you can do, not only for your cognitive health, but for your overall health and well-being.

My suggestion? It’s time you dust off your pedometer and get stepping!