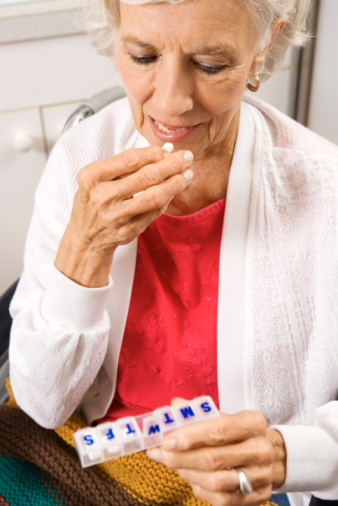 As a doctor, I have a duty to take care of my patients when they are ill. Often, this involves prescribing medication to treat or prevent a disease. The more important part of my job, however, is to earn my patients’ trust so that I can help them in their time of need. I find it increasingly difficult to do so when specific drugs that are designed to help people actually wind up doing them more harm than good. When this happens, patients understandably tend to mistrust the people and the industries who recommend the medications in the first place.

Such is the case with the recent controversy over certain osteoporosis drugs. The Canadian government, the FDA, and the European Medicines Agency have all either recalled or advised against the use of these popular osteoporosis drugs in the past year because the risks associated with them outweigh their benefits. Osteoporosis is one of the chief health concerns faced by women who have undergone menopause. They’re not alone, however. This brittle bone disease—which affects some 10 million Americans—can also strike men.

It’s important that you understand the health risks associated with these drugs. I cannot, in good conscience, recommend the use of a product that could causes more harm than good. And although the negative effects of these drugs may not be enough to have them banned outright, you have the right to know the effects they may have on your body so you can make an educated, informed decision about your health.

Healthy bones are strong, yet slightly flexible, and consist of living tissues that undergo constant repair and maintenance. Various hormones work in concert to maintain a delicate balance among living bone cells, collagen and certain minerals obtained through the diet, which give bone its rigid structure and tensile strength. For instance, nutrients such as calcium, vitamin D, magnesium and strontium play an important role in bone health. Too little of either may contribute to bone disorders. Hormonal changes that occur after menopause can also contribute to bone mineral loss and disorders, resulting in bones that become more brittle and prone to fractures.

In the past, doctors routinely prescribed replacement hormones such as progestin and estrogen to combat postmenopausal osteoporosis, among other complaints. Known as hormone replacement therapy (HRT), this approach reduces the incidence of osteoporosis, and thus fractures.

Fractures are a serious concern. Hip fractures, for instance, are a major cause of hospitalization, loss of mobility, and declining quality of life among elderly women. HRT also alleviates many of the unpleasant side effects of menopause, such as hot flashes, dry, thinning skin, vaginal atrophy, painful intercourse, irritability, night sweats, or depression.

But after decades of use by millions of women, evidence emerged in 2002 that HRT might actually increase a woman’s risk of developing heart disease and even certain cancers. A large government-sponsored clinical trial examining the risks and benefits of HRT, the Women’s Health Initiative, revealed an increased risk of death from cardiovascular disease, stroke and various types of cancer, including endometrial and breast cancers. These unexpected and decidedly unwelcome findings were widely judged to outweigh the benefits of HRT for most women.

Virtually overnight, women stopped using HRT and their doctors stopped prescribing it for the treatment of the unpleasant symptoms of menopause. Subsequent research has shown that the worst effects of HRT tend to manifest in women who started taking hormones well after menopause, but the popularity of HRT has never recovered, and probably never will. Despite any new findings, most physicians are uncomfortable prescribing hormones due to their uncertain effects.

The New Wave of Osteoporosis Drugs

Today, drugs are widely prescribed to prevent osteoporosis. To understand how they work, it’s helpful to understand a bit about how healthy bone is maintained. Because it is living tissue, bone undergoes constant “remodeling;” this involves a cyclic process of breaking down old bone cells and forming new ones. Normally, these processes dovetail neatly, and break-down and re-building activities occur in balance to allow for no net loss of bone integrity at any time.

After menopause, though, this process can become unbalanced. For many people, bone breakdown progresses more rapidly than bone replacement, leaving tiny pits in the surface of bones, weakened skeletal structures, and more fragile and brittle bones.

Osteoporosis drug therapies usually target only one of the two phases of bone remodeling. The first, break-down phase of the bone remodeling process, called resorption, provides a target for one category of osteoporosis-fighting drugs. Calcitonin is one example. Another is a class of drugs known as bisphosphonates (examples include Actonel®, Fosamax®, Boniva®, etc.) These drugs inhibit the activity of enzymes involved in the breakdown of bone. Estrogens and estrogen agonists/antagonists round out the drugs that act to slow bone resorption. Most osteoporosis drugs fall within this category. They are referred to as “anti-resorptive medications.”

A second category of drugs act to increase the rate of new bone formation. A synthetic form of parathyroid hormone, called teraparatide (Fotrteo®), comprises this category. It is presently the only drug approved by the United States Food and Drug Administration for this purpose.

Despite the current high rate of osteoporosis drug prescription, the negative side-effects associated with these treatments are astounding. Recently, a shocking report emerged revealing that a popular drug thought to reduce the chances of osteoporosis can actually increase risks of fractures, cancer, and other diseases.

Some of these drugs are taken orally (for up to five years), while others are taken by injection. Calcitonin is a synthetic hormone that is available as an inhalable medication. Shockingly, this particular drug has recently been linked to an increased risk of developing cancer when taken long-term, and last year the European Medicines Agency actually concluded that the benefits of taking this drug do not outweigh its risks. The agency went so far as to say that the drug should no longer be prescribed for the treatment of osteoporosis.

Likewise, evidence has emerged that the antiresorptive medications (especially bisphosphonates) may also have more drawbacks than previously suspected. In fact, the FDA panel voted 12-9 that the risks of this drug outweigh its potential benefits. Indeed, while antiresorptive drugs can reduce bone demineralization dramatically, they are not recommended for long-term use. Frightening consequences of long-term use of these drugs include unexpected fractures of the thighbone. Similarly, there have been reported cases of a serious (yet rare) bone disease, osteonecrosis, which occurs in women who have dental work while on the drug.

Additional evidence also emerged suggesting that oral bisphosphonate use may be linked to an increased risk of esophageal cancer, especially among people with a history of gastroesophageal reflux disease (GERD), among other potential side effects. Despite being designed to reduce fractures, bisphosphonate use has been directly linked to an increased incidence of one type of fracture, called atypical femoral shaft fracture.

The Bare Bones of Osteoporosis Prevention and Treatment

Unfortunately, and far too frequently, we learn about detrimental side-effects of drugs that were meant to improve our health, several years after these drugs had already received market approval and have been rampantly prescribed and sold to the public nation wide. The treatment of osteoporosis is still something that we haven’t gotten a full handle on, and it’s important to discuss your options very carefully with your doctor before proceeding with any course.

Fortunately, there are other options for prevention and treatment available outside the scope of drug therapy that could be attempted first, or can be used as a preventative avenue. These range from supplements (e.g. calcium, vitamin D, trace minerals, phytoestrogen extracts, etc.), to a better diet (the Mediterranean diet, for instance, has been linked to greater bone mineral density), to engaging in regular weight-bearing exercise, to stopping smoking. As with everything else, a healthier lifestyle is a sure-way to improve your overall health and well-being.